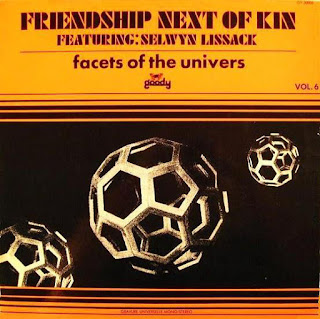 Hey everyone, this is that jazz immortal Selwyn Lissack's biggest album of 1971,even though it was recorded in London in 1969.....that's right, Selwyn Lissack!?.....the South African drumming legend?....oh forget it! I've never heard of him either,but that's nothing new in these 'ere parts guv'nor.
I spotted a rare appearance of Kenneth Terroade on Sax'n'Flute,and it's released by Goody Goody records of France to stick to the controversial theme of how France saved Jazz.
One must say its an excellently furious piece of free Jazz,and it's got some of those crazed semi-narrated vocals on "Facets Of The Univers".Dat man Kenneth Terroade sure can make that saxophone growl when he wants to.It's a wonder why our Ken didn't feature much anywhere else except for Sunny Murray and Alan Silva's BYG output,after around 1971.He either got a music lecturer's job,aka a cushy number, or got Drafted.
Were these guys on Drugs? If so, I want what they had.....if I took drugs that is,which I don't;that's for Hippies,but I'll allow any Free Psychedelic Jazz musician to do whatever he wanted.Now that's real Freedom innit?
Tracklist:

A Facets Of The Universe
B Friendship Next Of Kin
DOWNLOAD for your next of kin HERE!
Posted by Jonny Zchivago at 15:30

Thanx very much for this !
You blog it's reLLY AMAZING, found many unknown gems <3
Cheers from Italy