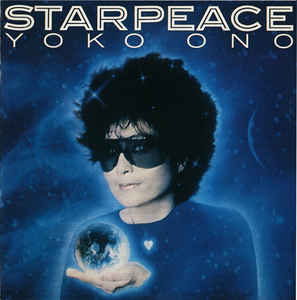 Oh No it''s Ono!
Feeling particularly sick of music and musicians this morning. So who pisses off more of the consuming public than anyone else....almost effortlessly. Yes, the best thing that happened to the Beatles,non-musician, Yoko Ono.....she stole our Beatle they cried.
One draw back is her constant referencing of Lennon, or 'John',rather like George Martin, who could turn any conversation towards the Beatles. She even manages to get a 'John said' moment on the bonus track "Imagine"...can't imagine who wrote that one?
This is probably her most despised outing, in her long line of despised recordings.The shrieking and caterwauling remains, amid a wall of electronic simmons drums,FM synthesis and tuneless singing.....all disguised as 'Pop'.....and Eighties 'Pop' at that!?
Oh Fuck, it's got Sly and fucking Robbie on it....are they really responsible for those turgid drums and people pleazin' basslines?...Oh Christ, it gets worse,.....'Produced by Bill Laswell...like everything was in the eighties....even that terrible album by John Lydon and backing band 'PiL mark 5 or 6'.The Bill Laswell Collaboration syndrome,that still blights some mainstream artists to this very day!?
Just as you thought it couldn't get any worse....Sean Lennon aged 8 is on it too....I'm gonna be sick!And the cherry on top is that it's full of hippy-drippy peace and love talk.
However, don't get me wrong, this is all I require in a Pop album.It manages to piss off virtually everyone, but keeps those toes-a-tappin'. I Love it.
If you're wondering why I've posted this, apart from it being brilliant anti-music, she's a woman in electronic music! It's synth-Pop innit, Einstein!?
Apart from that there are few women in the arts who have been as roundly vilified and subjected to as much naked institutional racism and Misogyny than that poor sad lonely lickle millionaire widow Yoko.


DOWNLOAD because john said so HERE!
Posted by Jonny Zchivago at 23:27

Now, now, simmer down there. In hurling your froth around, you've hit some targets that you really shouldn't have. For instance - the Laswell PiL album is in fact quite brilliant, and is not held up enough as an example how when we wants (or wanted) to, John could hold his own with the big boys quite well. To each their own, but still - not a good blanket missile to lob in this case.

And as for our subject - while obviously, no, this is not her finest work, her Plastic Ono Band album, and about 60% of Fly, give Can a serious run for their money. In her prime, you best believe that if she had been in a fighting mood, she could have vocally bodily slammed ol' Damo into a fucking wall.

But it's all good. Have some cocoa. These are stressful days.

I love Julian Cope's 'Japrock Sampler'. He completely proves that in the art world generally, and in the avantgarde world particularly, Yoko was huge. Certainly more significant than John. John was a total nobody. That said, I agree with Cope's belief in Yoko's claim to have had no clue as to who he was. She may have heard of the Beatles, lots of people her age had, but not known the names of individuals in the band. John obviously saw her as an avenue to being taken seriously as an artist. Japrock Sampler is floating around, you should check it out. I think you'd really like it. I have this record already, I have all her stuff, but thanks for posting it. I hope you and yours are comfortable as well as safe. Be well my friend Johnny.

@Incapability Brown....I already described this album as Good dressed as Crap reading between the lines....so citing Plastic Ono Band and Fly as her best works is just being TOO bleeding obvious.
"Album"...is a crap album dressed up as 'Good'...bloody awful empty record.Its a Bill Laswell album, with guest.

@ Five Guns West....i don't believe Yoko....she knew alright.
And so you should have all her records...they's all good...mostly.
John and Yoko were a symbiotic releationship,they both used each other.
Christ, i dunno why we're talking about the beatles?....kinda the opposite to why i started this blog in the first place.
And it was Apple Corps who got me deleted in 2012!?...can you believe it? Cleaners From Venus did an unauthorised beatles cover,and i get the blame!?

Thanks, we are more than comfortable and safe,i don't want lockdown to end,its been great!...hope you coped as well?
Cheers.

Bill Laswell killed both an album and the band I was in. We finally asked him why he took the project as it was obvious he wasn't into the band. He answered that he needed the money. He ruined us. We were signed to Warner Bros who foisted this guy on us. We were signed to not be competition to bands like Jane's Addiction who got signed as they knew our bass player's gf who worked there. I hate Laswell. Thanks for this opportunity to say that.

I remember you getting booted bro. I have 50 years of 24/7 round the clock mp3s. I have tons of stuff I have no interest in. I said I have all of Yoko's stuff. I didn't say it was good. I have lots of John Cage, Edgar Varese. I don't listen to it all the time. I pretty much got everything I wanted, discovered I was good at getting it and then wanted to have everything in the world a guest at my house could want to listen to. I wouldn't tell them something was crap, but I would say I couldn't stand something. You mention a symbiotic relationship and I completely agree. It's the template for pop psychology now, always marry up.....which is what? old timey medieval want to be baronry marriages. I think you did a really cool thing today. I am here a lot. The Plandemic has given me time to say anything. I can't remember the artists at this point but it was only a few months ago you had put together an unusual horn chart to listen to while listening to another album you put up. I listened, thought it was genius. That's the last time I had time to talk.

@Five Guns person.....you talk good.
I don't think most of Yoko's output was actually intended to be "Good".It was meant to shake us up out of our torpor,and question what we are listening to....she was an 'artist' after all? Except "Approximately Infinite Universe" which i think John wanted to be 'Good' but wasn't...it had that bland lennon's mates rocking boredom about it. John said....again!

I too have everything I wanted......years ago maybe probably by 1985...then i needed more Jazz and modern classical.....then I needed easy listening......then reverted back to punk rock,which i already had. Where do you go from there?...re-evaluating that which one thought was 'Crap', and outing the real Crap....like Bill Laswell and PiL mark 4/5/6 etc.....(his bass playing on that 'Painkiller' record could have been done by a passing six year old,but he passed it off as 'Dub'????.....should have been a duo.

The feudal Rock/pop system should also be blown up in the morning, as should most 'Rock and Pop' itself. Sometimes I think what the fuck am doing listening to this simplistic rubbish,and it is rubbish,but that don't make it crap.....am I wasting my time?...well Yes,just sitting on the dock of the bay witing for this bizarre existence to end....Otis was whistling, i'm writing crap about crap that no-one gives a crap about.

You don't have to answer this but...what band were you in?

Definitely Hootie And The Blowfish!

Having spent most of my unfortunately long life accumulating more music than I can ram down the necks of the more fortunate. But even so ... Starpiss? You tease with the promise of raising the post-apocalyptic cultural bar and then post this terminal shite.

Bravo! Splendid work my good man!! However, I'm off to stroke the perineum of my nephew (once the medication kicks in for him).

... and of course, the Laswell PIL effort is truly truly bobbins!

Not the Blowfish, i'm taking a punt at Huey Lewis and the Noods?

Of course everything the comes under the PiL banner after the needle was lifted from the closing track of 'Flowers Of Romance' is utter shite....so it wasn't all Laswells fault.

Flowers of Romance spent the last ounce of creativity they had in them. So good it was.

Something about Bill Laswell gives me the shakes, I liked some of the early Material material, but these days, more often than not, if I see that name pop up, I pass, narrow minded twit that I am.

shit shit shit ... i hope you're not really a copper! he's not wearing anything and hasn't woken up for ages and i'm running out of bleach (since hootie and der noods started injecting that shit) ... and air freshener ... swapping lockdown for lockup is a level of irony that i'm not prepared to accept ... i deserve less!

Saw Massacre (Frith/Laswell/Hayward) at the Knitting Factory back in '01 or '02. Hayward and Frith were, of course, incredible, and Laswell just diddled about and pointed at himself. Repeatedly. He actually pointed at himself, again and again, like, "Look at me--ain't I great?!"

Towards the end they did a number from the original Massacre album, "Legs" I think, and Hayward and Frith were all over it, while Laswell seriously struggled to keep up. Fuck that guy!

Hi everyone...the New World Order here....Are you Mr Badger Stump of 1313 Sewage farm cuttings, Stockport? Excuuuuse me sir! But I have reason to believe that you have been stooping to the kind of behaviour that could land oneself in 'B' wing at a Strangeways sex offenders maximum security establishment,sharing a cell with a certain Mr Stanley Knife, the Bognor Rapist....i should tread very carefully from now on son,if you don't wanna get Banged up, and banged!
we're watching you

Well Parmalee, it seems there's a unanimous opinion that Bill Laswell isn't very good.
I think we can safely say that that piece of business has been passed.