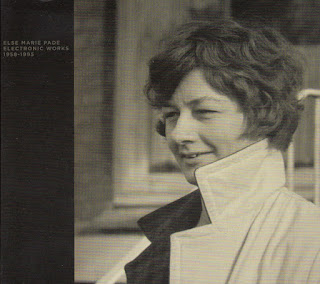 Denmark is famous for more than just great Bacon and Carlsberg lager isn't it?...well...er....no, but they did have another one of those female electronic music pioneers,who unwittingly was one of the few persons in the world making weird noises in the fifties.
A veteran of the noble Danish resistance in world war two, from a country that led the nazi-occupied world as an example in its zero levels of collaboration,and the sheltering of its jews; Else worked for the state sponsored Danish Broadcasting Corporation, where she produced very early groundbreaking electronic and concrete compositions for Radiophonic poems and Radio drama productions,like Faust,and the Little Mermaid.Rather like Daphne Oram had been doing in th UK.

Like Daphne,and Delia Derbyshire,they were just seen as employees doing what they were told.....a job.Subsequently they were ignored and forgotten.That is,until the younger generations tried to discover the roots of this music,and find out where this music that dominates the modern world comes from.So, from the early 2000's onwards she was now rightly recognized as an electronic music pioneer during her lifetime.

I suppose thats something insulting about me in Danish.....i prefer that to being insulted in english however, so it didn't work!

Loving this work. Thank you JZ

Thank you, I'll make a note of that.

Hey, thanks for this! Noticed the "Rejsen Til Bloksbjerg Og Valborgsnat" track is missing, though. Do you have this track? Thanks again!

Hey, thanks, Jonny! I appreciate the quick response (as I'm sure many others do, and will). Your blog is paramount!

I wonder why Rod Serling never had her majestic music on the Twilight Zone episodes. Thanks for sharing these amazing sounds.