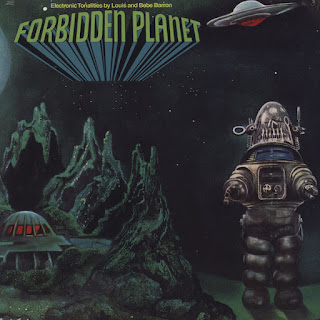 Here's the one wot started it all!
The first fully electronic soundtrack,and the first electronic score commited to magnetic tape.For the early sci-fi flick "Forbidden Planet",starring that bloke,formerly known as Frank Drebbin from 'Naked Gun' and Doctor Rumack in 'Airplane', Leslie Nielsen,the master of deadpan, as the star,believe it or not!?
But, the relevant part is that one of the credited composers was Female.
"Bebe" Barron, or Charlotte May Wind, was a political science graduate who studied music composition in New York, where she met future hubby, Louis Barron,who habored a liking for messing around with electronic gear. They got married, and one of their wedding gifts was one of those new-fangled magnetic tape recorders. It all started there I guess,and they began experimenting and acquiring primitive electronic devices,which Louis modified for sound generation.

The first electronic music for magnetic tape composed in America,"Heavenly Menagerie" was completed by Louis and Bebe as early as 1950 ,using the slow and laborious methods of cutting and splicing the tape together.

They opened the first recording studio using tape in New York, and catered primarily for the Avant Garde. This is where they met John Cage, who collaborated with them and convinced them that what they were doing was actually 'Music', and not just a load of funny noises stuck together.
While Louis spent most of his time building the circuits and was responsible for all of the recording, Bebe did all the composing. She had to sort through many hours of tape. As she said, "it just sounded like dirty noise". Over time, she developed the ability to determine which sounds could become something of interest. Tape loops gave the Barrons' sounds rhythm. They mixed the sounds to create the otherworldly and strange electronic soundscapes we all know in the Forbidden Planet soundtrack.
I Dunno if this soundtrack was nominated for an oscar or not,but it had to wait twenty years before it got a vinyl release. I think the powers that be just saw all this stuff as sound effects rather than music. They never went back to the Barrons, and they gradually became as ignored as all of the other electronic pioneers were on this planet. Electronics used as music was the only Forbidden Planet in the arts of the 1950's.

DOWNLOAD this forbidden soundtrack HERE!
Posted by Jonny Zchivago at 10:53

I guess you know they were given the soundtrack job
because the musicians' union was on strike. And nobody
considered this music!

Actually that was wrong. The Barron's didn't belong
to the union, so the movie didn't call it "music", but
"Electronic Tonalities", in order to not upset the union.

Great write-up and pithy description of the DIY process.

.....As she said, "it just sounded like dirty noise". Over time, she developed the ability to determine which sounds could become something of interest. Tape loops gave the Barrons' sounds rhythm. They mixed the sounds to create the otherworldly and strange electronic soundscapes we all know....

Any chance of providing "Heavenly Menagerie"?

I would like to send you an email regarding some stuff. It's all great, don't worry! :-)

So what is a good email address to send to?