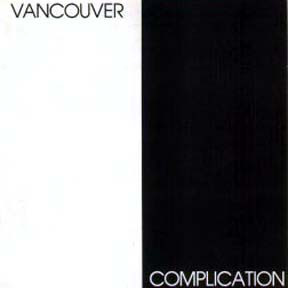 As with most things north american, one almost always has to cross the border,northwards, from the USA to find better ways of doing things.
As i've just inflicted two, yes TWO, volumes of frankly terrible local band compilations from Seattle on y'all; the natural remedy is to go north to Canada, and Seattles nearest neighbour, Vancouver, to discover a rather good manifestation of the local comp pandemic of 1978-82.
Its very 'Punk rock' (whatever the fuck that is?) orientated, but as long as its done well, that ain't no drawback.
Vancouver had an advantage as they did have one of the better first wave North American Punk bands in DOA, which is a good start.
Having visited Vancouver, I find it hard to understand why anyone would be angry who lived there. It's nearly perfect. I even went around the druggy areas, and even the junkies seemed happy...or was that because they had just had a hit?
I'm sure 'anger' is a subjective thing. So yeah, even in heaven there are probably some Punk bands moaning about boredom and the torture of the prospects of eternal life....or eternal boredom. No future????....'Too much Future', sings Heavens first Punk Band.
Indeed, Canada is a great place, and i won't listen to any Canadians who say otherwise.....you've never lived in the United Kingdom, or other shitholes like that...so shut it!

DOWNLOAD some complicated vancouvans HERE!
Posted by Jonny Zchivago at 19:04

i lived in vancouver for just over 15 years leaving in 2003 and yes its lovely and has always had a healthy music scene. its soooo expensive now most arstsy types can no longer afford to live there but it wasnt always so. when i lived there deals were still to be had renting undeveloped slummy places that were just fine for my needs. those are no more due to gentrification.

what i did notice, when i lived there, was how WHITE the place was. i came from a multi-cultural city and when i got to vancouver i was like "where are all the people of color?" there was always a large asian population, and many first nations, but ghetto-ised and relegated to certain neighborhoods. just white white white everywhere you looked.

its not like that anymore, it changed dramatically in the 90s, but i worked with this guy who was cleaning out old houses and he had this rental contract from the 70s he found. it said right in it that no blacks or jews were allowed on the premises. appalling, but if you lived there, not really surprising.

anyway, theres one reason to be angry in vangroovey.

today its the total crushing gentrification strangling every small business and any person making less than 25$/hour.

Sadly you get that no jew no blacks no dogs shit everywhere....even in Israel. Also, gentrification, corporate fascism and displacement of the poor into concentration camp like ghettos, is also a global trend......boy am i angry now!!!!


Its true- Vancouver is one of the loveliest cities in the world, and maybe in the 80's it would have been paradise. Even the drug areas really aren't that bad. But the price for housing is criminal...which is a real sin, since there is an ACTUAL Regal Beagle tavern in the best part of the city...

JZ, I'm Canoodlian and I can assure you that there is much wrong here. Even creeping neo-fascist gov takeover, though admittedly slower than in your green and sceptred land &c, and of course things are not as fucking stupid as in the States. Not saying much but there is that. At least you don't go bankrupt if you're unlucky enough to need doctors and hospitals up here.

(Actually, yes, let's be grateful for whatever crumbs we are permitted.)