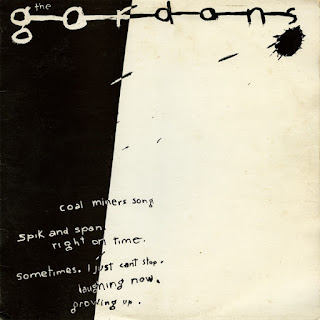 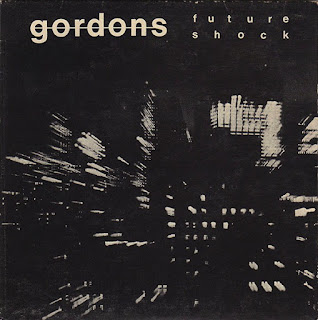 I may have mentioned that I reckon these are probably the greatest couple of records to come out of New Zealand. Somehow The Gordons managed to sound like a US Post-Hardcore band several years before stuff like The Phantom Tollbooth, Bitch Magnet and other such Homestead style groups flooded the market;they even outflanked early Sonic Youth.
In some ways the isolation of being trapped on an island in the arse of the planet serves the creative process in the same way that the Galapogos Islands developed weird and wonderful beasts found nowhere else. A bit like West Germany in the seventies, and Japan in the nineties. The fact that this LP+EP evolved independantly of direct american/uk influence is a testament to that sweet isolation.

DOWNLOAD if you're called Gordon or not HERE!
Posted by Jonny Zchivago at 10:04

Years ago a mate put "Future Shock" on the end of a cassette tape and so I've only had the first half of the song...

Is this from the CD or your own vinyl rip? It's just that your vinyl rips are amazing - I don't know how you do it1

Tell you what, I've never heard the second Gordons album - unlike this one it never got reissued. I don't suppose...

Its the CD reissue. The vinyl rips are thanks to some cubase magic mostly.

Ok then. i'll put the inferior second album up next.

One of my all time favourite records.

I can't believe it's not a more well known LP, even amongst underground aficionados..

People who know the record understand its greatness.

Onya for spreading the word Jonny.