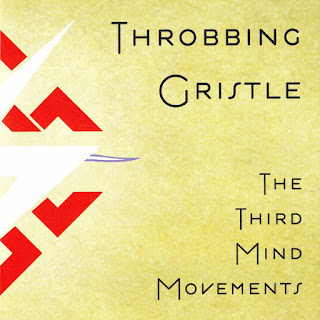 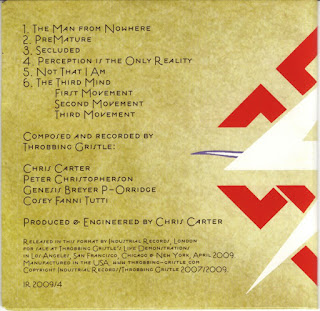 I shuddered at the news that Throbbing Gristle were 'reforming' back in 2003!
The track record of such reformations is shaky to say the least.The worst being, obviously, The Sex Pistols. Which in one act of greed, marked as irrelevant, a whole swathe of modern pop culture.
'Please don't do this TG', I would have cried out if I gave a shit.
The reality of seeing a bunch of middle aged pre-op Transsexuals and bourgeois former hippies dressed like Chumbawumba  reviving themselves as "Wreckers of Civilisation"(or the wreckers of Industrial Culture?) was not quite as bad as the Pistols; because they had some new material that wasn't too bad......mainly because it sounded like Coil.
The influence of the late 'Sleazy' Christopherson is very evident, as he was the only TG member not to lose it artistically during the previous 25 years.
The little old lady of the group, no not Cosey, is the Gen-der reassigned Genesis P. Orridge. Who still manages to speak projecting an Oscar Wilde at customs-like impression, that we, and he/she, are listening to a undeniable genius.
The music of TG from 1975-1981 was as close as you can find to totally original and undeniable genius-like in its conception and delivery. A rare, and genuine reflection of the world in which we lived in; and bizarrely, is probably more relevant today that back in the day it was made.
In a way, the new(-ish) TG recordings are also a reflection of the sick abortion that is contemporary society. Represented here by the crystal clear digital blocks of over processed electronic sounds, almost devoid of Human Beings.
Yep, the music on this album is a very antiseptic version of Coil with Guests Genesis P., and Cosey Fanni Tutti on that fucking awful guitar she tends to muck about with every now and again.
I suppose it brings in a bit of cash, so why not?....but don't pretend its anything more than going to work at the office to bring home the bacon.
Industrial Records, aka Chris and Cosey, managed to write me a nasty legal e-mail once threatening legal action, or aktion(?).......an act up there with the Pistols' "Filthy Lucre" tour for making a previous career totally irrelevant. Did they ever listen to their records?

DOWNLOAD the wreckers of Industrial music HERE!
Posted by Jonny Zchivago at 11:53

Please don't Galen!... or I will have to adopt that very same Oscar Wilde pose.
Cheers ;)

"The music of TG from 1975-1981 was as close as you can find to totally original and undeniable genius-like in its conception and delivery."

Hmmmm...I would posit The Residents hold that title...and still do. :)

(The Residents)Granted....although very original, up to about 1982 (a bit like TG i suppose), they didn't launch too many sound-alikes, unlike TG. So maybe Influential was a word I missed out there?

Sound-alikes? I can't even imagine such a thing...failure from the get go. And still very original far after '82. If you've never done so, and you'll get a kick out of this, pull up the lyrics for the track "Just For You" and read along while listening to one of the few, rawer, Icky Flicks versions that are on youtube (unfortunately, most of the best ones have been scrubbed, but the Lisbon concert version is particularly good, even if there is no video to speak of. Tell me if it doesn't accurately represent the sentiments of just about every politician you've ever heard. :)

'This file Is unsupported'. Can you re-up this, please?