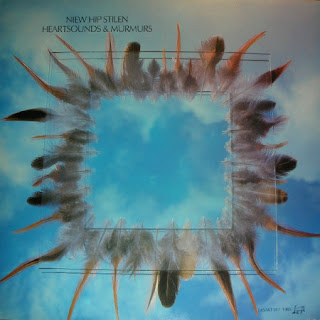 Very interesting mid-eighties Jazzy Post-Punk experiments from Rotterdam's very under represented trio Niew Hip Stilen. This could have easily come from one of those Jazzy Post-Rock spin off's of Tortoise in the late nineties, but its better than that,and way less 'hip', despite the word appearing in their collective noun. These chaps can play their instruments,and aren't afraid of the odd odd time signature.I suppose Blurt would be a reference point here.
Included with this ,their sole album from 1985, is a live recording from the Doelen Festival around 1983(?), and a bunch of untitled demo's. Kindly provided by Henk Madrotter of Prutsers and Treasure Hunt Blog fame.

DOWNLOAD and get hip HERE!
Posted by Jonny Zchivago at 14:01

Yep :) And their front man, Maarten van Gent was playing guitar with The Rondos before this and from what I understand they, Niew Hip Stielen are back in the studio again... For me, these guys were the best post-punk band from Rotterdam, maybe from Holland, way ahead of their time, and that one time that I saw them live, at the Pandora festival in the Doelen, that was the best concert, even better then Psychic tv, Einsturzende Neubauten and loads and loads of other bands, Maarten can play a crowd like no other.... Actually also saw the Legendary Pink Dots live there, heard some music from them which I really liked but I found that concert terribly boring.....

As far as the live and demo recordings I send you and that you provided here, there's a bit of a mystery there.... I bought that cassette at Haddock Record shop in Rotterdam, around '84, it was the only cassette they had and Maarten and the rest of the band have no knowledge at all about it.....

Niew Hip Stielen... Simply fantastic.... The only band (I think) that comes close to them was the Rotterdam post-punk band Kiem.....

Hahaha :) Saw them many times live :)

And Kiem's drummer, Cees Meurs/Ijzermans was the drummer for a while in this band:

Any chance you'd be able to post their 7"? Thank you!

Sorry, don't have the single.