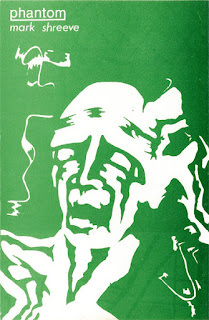 Seems 1980 was a prolific year for Mark Shreeve, a year we've already established was the high point of this modern renaissance for art and music that some of us were privileged to have lived through.
It's all finished now of course, with the stragglers having to reinvent the wheel again and again, like landscape painters have had to do for the last 500 years or so; that's the future we have to look towards......the same things but done again,masquerading  as something new.
I suppose this rehashing trend started in the seventies, with stuff like 'the Mod Revival' and the resurrection of 'Ska'.
The UK electronic underground of the early eighties was basically a revival of the German Kosmiche music of the early Seventies, repackaged as DIY Electronica, and set in small town provincial England......well no-one else was doing it were they.Very unfashionable in 1980, so if you wanted to hear music like this then you jolly well had to go and 'Do It Yourself', as the Post Punk manifesto would have stated if it had ever existed.
So, here we get a tape of Electronic Space Symphonies recorded in a bedroom in such an exotic location as the dying English seaside resort of Great Yarmouth rather than West Berlin.
It wasn't always like this for Mark however. He did get to work with a member of Tangerine Dream later on, his obvious inspiration. And, less impressive, infact downright criminal, he wrote several hit tunes for page three bimbo Samantha Fox in the mid-eighties!.....I assume those tunes weren't exploratory electronic odysseys like those on 'Phantom'.....would have been fun though to have Sam vocalising to something like this instead of whatever crud she inflicted upon our innocent discotheques? 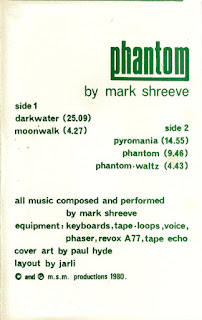 DOWNLOAD this phantom to your machine HERE!
Posted by Jonny Zchivago at 19:57

I met Mark many years ago around 1998, at party he was hosting, the music was a bit programs rock so while rifling through his record collection to find something more party oriented he told me that his favourite Simple Minds track was don't you for get about me, a bit odd given that it's probably their most commercial and some would argue their least interesting. What does this say about Mark? He likes pap like the rest of us.

Looking forward to listening to these. It was only after a quick google that I realised that Mark Shreeve was a member of Redshift - I have a Redshift CD which I now have to dig out.

Simple minds eh? "Empires and Dance" was a good record wasn't it/....and it doesn't surprise me that Mark would have a dodgy record collection,and even dodgier taste.

Redshift hmmmm....he was in another group/duo with Ian Boddy too, something like ACM or something?

Mark Shreeve's career is interesting. If I remember correctly, the success of Tangerine Dream prompted record labels to look for other similar artists, and Mark's early DIY releases drew attention. But though they poured a lot of time and money into his 'muscular electronic rock', Jive Records found they couldn't actually create a trend - I think they tried the same thing with Spanish act Neuronium. In Shreeve's case, the expensive studio time was turned towards library music, where he had some success, and pop, where he ended up writing Touch Me and a couple of other tracks for Samantha Fox. Some of his tunes were also used on film soundtracks. Eventually Shreeve returned to doing what he probably wanted to do in the first place, Tangerine Dream-style ambient electronica, as Red Shift. Arguably he's still one of the most artistically and commercially successful British purveyors of e-music, though that says a lot about the relatively small size of the fanbase. (PS - I own the Roland TR-808 he used on Assassin).

Oh, and the group he was in with Ian Boddy was "ARC".