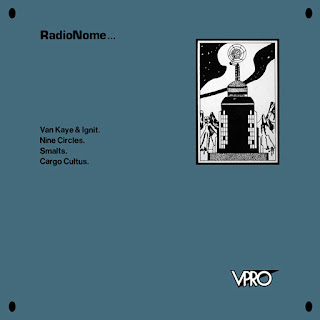 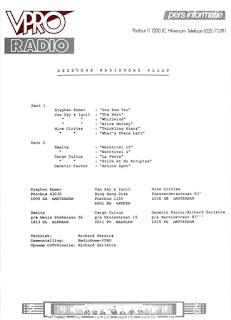 Get your electronic clogs on and kick your way through a dyke to simulate the wave of minimal synth duo's that flooded the low countries around 1981.Of which this VPRO Radio compilation is constructed around.
The fact that it included the magnificent 'Nine Circles' is reason enough on it's own to download this treasure, or even shell out the 130 euros that it is apparently worth in these sad ol' days.
They must have been a miserable lot at that trendy radio station, because they chose the two most miserable, but best, Circles tracks from their largely unreleased in their lifetimes back catalogue. These being the only tracks that made it onto vinyl in their original existence.They're now re-formed, cashing in on the minimal wave phenomenon hopefully.Even if they do look like a couple of Brexit/Trump/Le Pen voters lugging synthesisers around on the back of their mobility scooters......don't we all?
I'd put up their entire works for download, but I upset the lady of the group when i posted some of their works a few years ago.Some people don't get my humour.... amazingly....(not!). However she was greatly insulted and ,probably rightly, Livid(For which I humbly apologise). So I got a complaint, and had to withdraw it or be deleted...again!....(ps, but if you e-mail me i'll send you a link ;-))
The rest of the tracks are pretty good too by the way.

I know I can probably look that up, but it's more fun to ask.

It's "RadioNome", like in RadioNome "VPRO" (Vrije Protestantse Radio Omroep), The Netherlands.

Thanks for this! By chance, would you happen to have Nine Circles -- The Early Years to share? Thanks again!