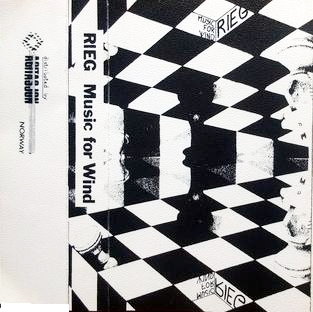 Norwegian Bloke (Geir Låstad) in bedroom with synthesiser makes music about the weather......what else would you expect? One has to do something, apart from commit suicide, in those endless dark winter days.
Yep lots of 'white noise' is utilised to make fake wind effects, y'know, the first thing everyone did when they unpacked their new synthesiser......Hey Mom! Listen to this!
Later, we sampled burps into our new samplers and did the same thing; except this time it was for our very unimpressed girlfriends.......although it was very rare for a male into electronic music to actually have a girlfriend.Then when they did eventually find a partner, the synth went into the bin briefly until they were inevitably also 'binned off'for being boring, then came the come-back CD-r.
Geir also disappeared after 1980 only to mysteriously return in 2008 with a....uh-hum(clears throat)....comeback CD-r!.....Is it possible he got a girlfriend in 1981, then when he was divorced by 2008, vented his male menopause by retreating to his misspent youth in the bedroom and his youthful first love?....I think so.

If you hadn't noticed 'Rieg' is Geir spelt backwards.....clever eh? 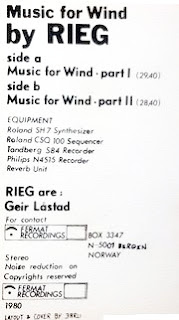 "it was very rare for a male into electronic music to actually have a girlfriend" there are exception....Im ummmm living proof but then Im an anachronism!

I suppose i'm guilty of being into electronic music at some point, and i didn't have a girlfriend for a long time. Then i got a GF and my music hit the toilet...several GF's down the line i've learnt to keep music and women separate. Especially since i got dumped.....best thing that ever happened to me frankly.