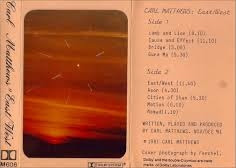 Another mixture of Berlin School, via Cumbia, synth noodlings, ambient, proto-New Age introspection and minimal analogue repetition from my new favourite of the UK Electronic Underground of the early 80's.
I was always familiar with the other chief protagonists in the seedy underpants of the prog dissenters in post-punk Britain, like Dave Jones,Rick Crane George Garside and the ICR crowd; but only recently have I indulged my ears with the swirling beauty of Carl Matthews' obscure canon.
Dull John Q. Public name aside, it's without doubt music for flotation tanks and astral travelling from the comfort of an armchair, but it does have more meat than most new-age or ambient musics. Something to grasp onto outside of your personal sensory deprivation chamber. All, naturally, full of gorgeous analoginous (made up word?) guano regurgitated by Doves and spread on toast made from ethically recycled cassette tape........Christ! I've spent far too long in that Flotation Tank again!

DOWNLOAD from the east, the west, home's best HERE!
Posted by Jonny Zchivago at 11:01

Reverb Worship / SleepFUSE did a re-release of this hard-to-find title on CD-r, at a much cheaper rate than the cassette originals which run well above $80. When I received the re-release, I had not heard of Carl Matthews, although I was familiar with other experimental analog synth artists of the time. I found I enjoyed this album the more I played it, listening for the tiny nuances and live-changes that make the progression of the sequences in many songs come alive and morph (even if the tracks themselves are basic and 'minimal'). Interesting listen for sure.