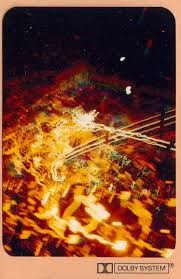 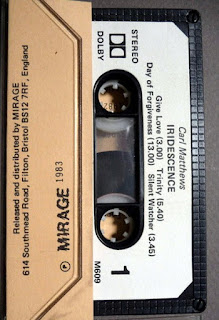 Another cassette of proggy space synth hypnotic meanderings from the Edger Froese of Cumbria, Mr Carl Matthews.
More of the same electronic background music to accompany a video of a deep space probe scooping up space dust for analysis.
My Analysis is that this is very good for navel gazing in the bath surrounded by scented candles.
A pastime I can't indulge in because I only have two en-suite showers, and no bath, at my gaff, so I just play at being Voyager 3 in my mind, (yes, I have a mind and I know there were only two voyager probes!!!?).
As Voyager one had a golden record bolted to its side showcasing the 'sounds of Earth' as selected by the great Carl Sagan and chums back in 1977, maybe my imaginary Voyager 3 could have some golden cassettes stapled to it's hull?
I'm sorry to say that Carl Matthews, good as he is, would not probably make the final cut. I'd obviously select Danny and the Dressmakers "39 Golden Grates", Solid Spaces' "Space Museum" and 5XOD's "Dada Computer" tapes as my suggestions. At least if a malevolent Alien race would discover the probe, and by some miracle have a vintage cassette deck available in the junk shops on their planet.They could listen to these tapes and would be profoundly 'put off' the idea of invading Earth to steal 'our women', as the Martians often did in the fifties. Some women to this day still insist they have been abducted and fondled by randy space aliens. One listen to Danny and The Dressmakers and Earth's women would be more than safe from any Groping Greys with ungentlemanly urges. Earth women are in far more danger from the indigenous aliens of our own planet......we call them 'Men'. Those dirty little bleeders with their barely under control sexual urges'n'all! The leader of whom is a creature who looks like Jabba the Hutt in an ill fitting business suit, sometimes described as resembling a chewed piece of gum rolled in cat hair.....yes.....Harvey Wankstain himself. Beam him up Scottie!

High Jonny!? We need another space race you know what I mean captain? Never heard of this guy but I'm tired of thanking you every time I mary turn around. So I'll be like the Russians instead when they sent poor Laika up to die for gain of nothing but to boast in this post's comments. I'm posting a link for a mixtape I made awhile back from shit I stole around town a few years back. Might recognize some of your own astronaut laundry you lost off the tether likely. I know this is rude to do and possibly in bad taste but you once said you hated the sounds of space anyways. So you can't get mad at me because I love spacey shit. I'm a cadet my pops always said. So here is a tribute I did to Vanguard I the biggest disappointment still floating in the earth's rotating junk belt for another century or two I can't remember anymore. You ever seen my old blogspot before Jonny? Avant-garble Mixtapes? Not sure anyone has. I made it to ten comps before I shit in the cosmonaut trousers as it were. So even though this comment sucks mars bars you should be buzzing Alden about it. As I have never had even one comment in the four or so years since I launched the fucker into orbit. It is the Vanguard I of the blog world I suppose. I'm trying to stay awake for your radio show so I'm writing all this nonsense to stay from drifting off into the void. Neato space related metaphors huh? And if you like my comp there is also a second volume as well! I know! Anyways I call it Space Waste! I plan a third perhaps this Mr. Matthews can land on it... okay I'm done. Sorry. Go here after you're done here space rangers.
https://avant-garble.blogspot.com/2014/01/blog-post.html
Thanks for nothing NASA! Do they still exist or was that a budget cut too. I should stop now. Fifty minutes and counting to the show... oh boy!!!

Hi there,
yes I am familiar with Avant-Garble.
You have to be patient and persistent in the blogger-sphere to get any recognition, appreciation or even abuse. Once you get abused you've basically made it!.....time for another compilation methinks, including brother Matthews?
Hope you enjoy the show...its an electronic one.
Cheers,
JZ