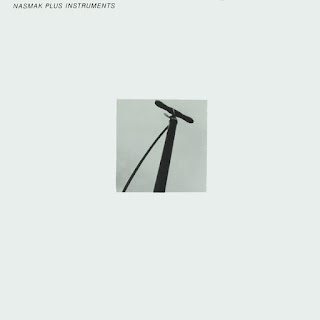 Rather excellent debut LP from electronic flavoured Post Punk band from Eindhoven in the Netherlands.For their short lifespan of just three or four years, they managed to record enough material and release it all which would fill up many a long career for most groups.
It's all very 1980, which is officially the best year ever for rock/pop music.....yes?.Classic Post-Punk restless experimentation , stretching boundaries, challenging taboo's, and striving to make something new that we haven't heard before,whilst at the same time rejecting the past. Something that we could well do with today in the mainstream music culture,but then again was it ever like that? There was still total crud in the charts in 1980, but the underground scene was never more healthy.Todays underground music scene is undoubtedly thriving, but it suffers from ease of access and the shear quantity of it all.Its all high quality too,but most of it is derivative of something past.1980 had a freedom to find a future that had never existed in the past.The 21st century was the future, but some of 1980 still sounds like the future to these heavily damaged ears and brain cells.The modern era is mostly an exercise in disguised archaeology, and passing it off as inspiration.....its good but it doesn't interest me much.....its a kind of Avant-Cabaret rather than progressive. For me music died around 1983,or even earlier.Post-punk was its death rattle......discuss.

DOWNLOAD plus nasmak plus instruments HERE!
Posted by Jonny Zchivago at 15:11

Never heard this one, and really totally different from what I know from them :)

After thinking about it I actually agree with you, for the most part anyway. We had this discussion before, hip hop, for a while it was like punk but it bled out and became a caricature of itself pretty quick....

I think a good example of what you're saying is this artist, Arrington De Dionyso from Olympus, Washington State, he first was in a band that has a bit of a cult status, Old Time Relijun, pretty good band and then he went solo doing songs where he sings in Bahasa Indonesia, really liked it too and it reminded me very much of Blurt... So when he came here and he visited my house I told him so, he had never heard of them and I played him some Blurt, I could see the surprise, he was not inventing the wheel so to say... He got himself some fame by the way, the whole Pizza Gate scandal, with all the pedophiles etc. ? He once did a mural in that Pizza club in Washington DC (removed years ago) and people started posting those murals on the internet and he got loads of death threats....

Here, is this Blurt or not?

And that's where you are right, it's just re-inventing the wheel, it often seems like it's all been done now and I've been feeling like that for many years.... Then I start getting into the traditional music here in West-Java and I'm blown away, and after some 18 years in it I'm still being blown away, I wish I had a secret door through which you could pass and let me show you some shows here, I'm pretty sure you would be blown away by it too, it's just... wild, an energy that can only be experienced not explained, I don't care how cliche that might sound....

And I wish you could be in Rotterdam the 18t of November where I'll be dj-ing )playing mainly Indonesian traditional music and Karinding Attack will be performing. It's guys like these and some others like for example Wukir and his crazy self-made bamboo guitar that make me think, yeah sure it's just mixing old stuff (by now) but it can still be great fun!

Of course my comments only apply to the western world.There will always be a time lag for the rest of the planet,which in some places are 50 years behind....which a good thing,because you can still revisit some music that is genuinely exciting and coming from an honest place.It may have been done before, but its pure.....like That Semen Angels person....very impressive.
There's a part of me that doesn't like the fact that these artists get to play in a New York art gallery like some kind of music zoo for the intellectual hipsters of manhatten....but they would be far more uncontaminated than the tired musics stomping the treadmill downtown.
I am of course playing the Devils Advocate ,and 1983 isn't a solid wall for musical innovation...there were and still are bubbles that rise and burst, like Hip-Hop.....which very quickly drove into a brick wall round about 1988.
Although I would never obviously call myself an intellectual hipster, i fit the profile, and would love to witness these Indonesian loonies in the flesh......bamboo guitar and all....one day!.....it can still be fun,and even exciting....reinventing the wheel is a phrase i forgot to use in my short rant!..but wheels are still the best thing we have to going forward.

Yes in some parts of Wales, Belgium and/or Limburg the wheel has yet to be invented, and of course we look forward to the 2130's when they do.