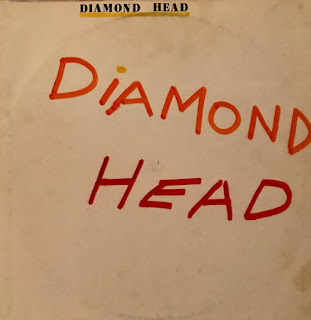 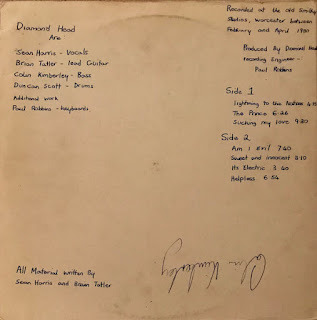 Did someone mention Diamond Head in the previous post?......dunno what's happening to this blog, but at least I'm enjoying myself for once.
Say what you like about the plus's and pitfalls of The New Wave Of British Heavy Metal,but it's early days were as DIY as what yer Punk rockers did. And this Diamond Head self-release was The 'Spunk' of NWOBHM,and came in (Phanar Phanar) many versions of the now yellowing carte blanche sleeve as there were discs pressed.
Fans of this punked up version of seventies Heavy Metal were many,made up of those kids(all male) who were crap at sport,too ugly to get a girlfriend,and not trendy enough to like Joy Division who they secretly thought weren't rockin' enough!?.....They never heard the live side of 'Still' in time to save them from the Debut Iron Maiden LP;who,incidentally,had rivaled Diamond Head'e DIY cred with their own 'Soundhouse Tapes' self-release.
These spotty denim and levver clad oiks got to purge their trauma flashbacks of bullying at school by listening to that exotic beast,previously banned for the previous few years,Thee Guitar Solo,which had now been inserted back into that Pistols 'wall of sound', which along with Thin Lizzy and Motorhead had informed these frustrated outcasts as to the direction they found most comfortable. Punk had either gone weird,funky, or just stopped rocking completely....so in it's place trod the living fossils of Iron Maiden, Saxon, Venom, and other such effrontery to good taste from the provinces of the UK and fill the vacuum left behind by the imploded Pistols.
Basically, take away the solo's,change the lyrics to something vaguely political,add a shouty singer and you've got Punk Rock as last heard on The Damned's "Music For Pleasure" LP.
Basically its just entertainment for young men made by other young men, like Football used to be. We like to jump around,push each other and shout stuff......simple fun for simple folk.
As has happened to football, girls want to get involved nowadays,so I dunno what this type of male are gonna do in these wonderfully 'woke' times......video games? Suicide? Homosexuality?...the world's an oyster of endless possibilities.....as long as you don't upset anyone.
"Am I Evil?....Yes I fucking well am!"
Tracklist:
A1 Lightning To The Nations 4:15
A2 The Prince 6:27
A3 Sucking My Love 9:35
B1 Am I Evil 7:39
B2 Sweet And Innocent 3:13
B3 It's Electric 3:37
B4 Helpless 6:52
DOWNLOAD to give the head some relief HERE!
Posted by Jonny Zchivago at 23:28

Er...that's one way of putting it?
Yeah i have that on compact disc....compiled by that annoying buggar from Metallica as I recall.
Not sure i wanna post a compilation....will consider. Was gonna do Witchfynde,and Venom,but i guess they are represented on NWOBHM revisited. saves me some work.

Very interesting.... Those times I mean.... January 1978, my 13th birthday and I got my first record player and enough to buy 4 records. There wasn't all that much choice in the little record store in the village where we moved to from Rotterdam when I was 8, but I bought Never Mind The Bollocks, No More Heroes, Lust For Life and a double album from these weird guys in make up that I had never heard of before.... I'm ashamed to say it.... Kiss Alive II.... So in the next two years if I had any money I was buying punk and heavy metal albums.... As far as the heavy metal stuff that I (vaguely) remember, some of the stuff I really liked, what comes to mind.... Saxon, Tigers Of Pang Tang, Judas Priest and for sure that really weird band Sorcery from that equally weird (now a) cult movie Stunt Rock :)

I'm liking this metal direction you're taking. Rock On!!

Hmmm ...metal direction huh?
It's a guilty pleasure i'm sure, but that Diamond Head post has received the lowest hit count of anything else this year so far.....they were incredibly Naff i suppose, but that's the attraction innit? Anything that flips the bird to the hip stuff that i like is a winner in my eyes. My fav NWOBHM band is Saxon after all?....ideally i'd like to hear a Saxon plays Joy Division record,and i've always wanted to play like the Bass player in Saxon...whoever he is...who seems to only play one note in every Saxon symphony to motor cycles and leather jackets.

As for you Henk, i admire your openness in admitting to Kiss II....i did find that in a lot of vinyl i bought off a suspicious long haired bloke a few months back.....went to play it out of interest what they actually sounded like,and found that the sleeve was empty!?...should have checked.....the pile did have Saxon's marvelously dumb Steel Wheels album as compensation....what was your Saxon?.....those one note basslines do it for me.

I only had their first album and that Wheels of Steel album, listening to them on youtube now 'cause I can't even remember what they sounded like... Pretty good actually!

Kiss... as much as I despise them now.... Back then, my 13th birthday, 1978, I kinda think it's only logical that I bought that album, a guy spitting blood and three other guys with face paint.... Loved them for about two years or so, member of the Dutch Kiss Army, going to fan events etc., drove my poor parents crazy, and then they came out with that disco song and those four awful solo albums and it was over for me, I mean... Crass... Gang Of Four etc., etc., a no-brainer really.... Their first live album, I can still listen to that, some great songs on that, very dirty, very slow...

I'm not religious and my parents neither, and "officially" we were protestant, not catholic, but I feel like I just confessed!

As a person who admitted to liking A Flock of Seagulls,among other such dodgy acts, I am in no position to withhold forgiveness for such a minor misdemeanor. Go in peace my son.