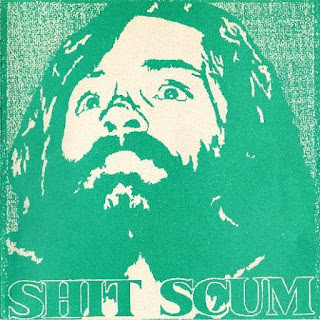 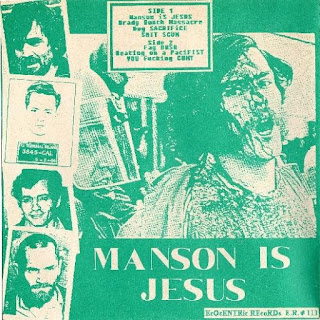 Seems like Napalm Death imports had even hit Newton, Massachusetts by 1989,and had entered the GG Allin obsessed, Seth Putnam's, delicate shell-likes, leaving a dreadful impression on this sensitive young man.
The formula was simple,replace UK Grindcore's lyrics about multinational corporations, nuclear destruction,and schoolboy politics,with about how Gays,Jews and Blacks suck,and you've got a nascent version of Anal Cunt called ,rather charmingly, "Shit Scum".
Upon hearing Napalm Death back in '87,I thought they could not be serious!?They were taking the piss surely?....turns out they weren't!
Shit scum leave a similar taste in the mouth,and even manage to take it all down a peg or two,into the sewer.
Of course Seth's next Group would take it even lower,exposing the bedrock of awful taste below through which it is not possible,or advisable, to go........there's a challenge in there somewhere?
Young Master Putnam must have been ignored as a child,and now he's dead,ignored as a corpse.
However his vast canon of work lives beyond the grave,leaving an irremovable skidmark down the rear gusset of the human race's Y-fronts.
This 33rpm ep does, however contain the best ever cover of possibly thee worst ever pop group, Guns 'n' Roses' truly mind erasing "Sweet Child Of Mine";fittingly re-titled for our benefit,"You Fucking Cunt".
"Fag Bash" is a sludge metal classic;and i'm sure the bass-line to "Brady Bunch Massacre" is cleverly adapted from "Wrong Place Right Time" from The Fall's "I am Kurious Oranj" long player?
As for Manson being Jesus?He's got just as much  a case to make this claim as anyone. Trouble is that anyone who does is usually a blood craving nut job, a chief executive officer,or a high ranking banker.
One thing that Putnam definitely  has in common with both Chuck and Jesus (as in Jesus Allin),the other ,son of god Jesus,and Seth Putnam too;is that they were all ignored as a child. This explains a lot.
This goes out as advice to all those casual breeders out there......don't ignore your kids if you're gonna have them please;or just wear a condom! Going in bareback You could have just spawned the next Anal Cunt, or worse....a new religion!?.....or even worse than that.....a new Guns'n'Roses!!!!?
Not only can our latex friends protect us from HIV,syphilis and Monkey Pox,these magical prosthetic sheaths could have saved the world from Gun'n'Roses too.....and maybe even Charles Manson?!
If these facts were made clear in the 1980's AIDS would have now been but a distant memory.....instead we got the only plastic ever released by Shit Scum.
Tracklist:
A1 Manson Is Jesus
A2 Brady Bunch Massacre
A3 Dog Sacrifice
A4 Shit Scum
B1 Fag Bash
B2 Beating On A Pacifist
B3 You Fucking Cunt
DOWNLOAD it here you fucking cunt!
Posted by Jonny Zchivago at 11:45

wow! this is really rocking my woke world. well done you.

How dare you call me a fucking cunt! I'm a cucking funt.

Sorry Anonymous ,no spoonerisms allowed on the entirety of the blog...unless someone wants to of course...you cupid stunt.

how very dare you take the name of Cupid Stunt in vain ... certainly not in the best possible taste!