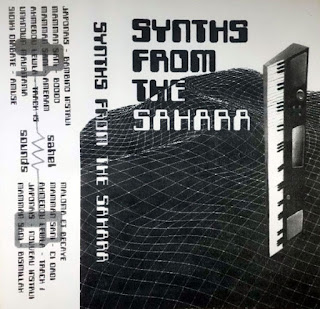 Try and explain the concept of Kraftwerk to an african and you'd get one of those... 'what the fucking hell are you talking about???'.... kind of looks. You won't get any exotic versions of "Are Friends Electric?" from the Sahara any time soon, just loads of stuff that they always used to play, but...with synthesizers.
Less than interested in the new sonic opportunities  that these electronic toys offered, they just play these things in the same way a classical pianist would play them.....cluelessly,but charming.....except the African would never have considered themselves as the height of civilized sophistication,like those bastards in the classical world would do.
Basically, if the musicians involved, as represented on this C60, had played these same tunes on traditional instruments it would have sounded exactly the same.....so why bother?
What I wanna hear is a weirdo from Mali who dresses and sounds like Gary Numan in 1979...that would be something special to behold.
This is as close as i get to the thoroughly 'do not resuscitate' middle class world of Global, or World, music,as championed by such poncy twerps as Peter Gabriel, Paul Simon,and David Byrne....although David Byrne is in absolutely no way a twerp, just dreadfully misguided on occasion.
However, play this at any white suburban wine and cheese vernissage in support of their local artist 'of Colour',and you'd be heralded as a white hero of outstanding tolerance.
In their minds, anyone who plays any African music simply cannot be Racist,and therefore an eagerly anticipated member of the White Non-Racist but I am multitudes that smear themselves across the western world like so much shit on so much scented (bog roll)toilet paper.
Racist moi?...Naaaaah...well...er....probably.
I do remember being part of an argument about whether Ali G was racist or not, when one of the gobbier participants shouted "look! I've slept with a black man so how can I be Racist!?".....hmmmm?
Who's the most celebrated African Musican?...no, not Fela Kuti, it's obviously Freddie Mercury of Course....that's why there's a track called 'Bismillah' on here inni?.
Tracklist:
A1 Japonais– Bambino Instrui
A2 Mamman Sani– Boodo
A3 Mamman Sani– Ameran
A4 Ahmedou Lewla– Track 15
A5 Unknown Artist– Mauritania
A6 Sidiki Diabate– Amuse
B1 Maloma Et Becave– Untitled
B2 Mamman Sani– Ci Dadi
B3 Ahmedou Lewla– Track 1
B4 Japonais– Nouveau Instrui
B5 Mamman Sani– Bismillah
DOWNLOAD some instant non-racist cred HERE!
Posted by Jonny Zchivago at 14:47

ahn, bismillah means 'in the name of god'. god being the good allah, in that context...

"World Music": catchall term that means any music from some "exotic" country in Africa, Asia or South America that isn't dominated by Western shite.

Freddie was son of Parsi-Indian parents, practising Zoroastrians. Have you listened to much William Onyeabor? Excellent stuff - I can recommend 'Everyday', and 'Good Name', which to my ears borrows a bit from Talking Heads' 'Girlfriend Is Better' - or maybe it was the other way round? David Byrne later reissued his albums on Luaka Bop so presumably all's well that ends well.

South African minimal synth is not something i have previously encountered.Its hard to be miserable in sunny weather.....although i manage it just nicely thank you very much indeed.

You could have segued from this to Cut Hands!

Coo, this looks a bit of alright.