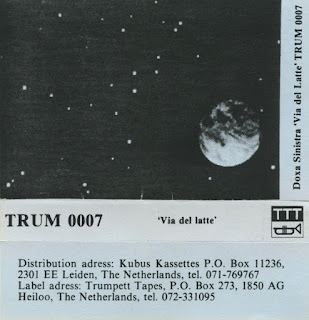 They are raised on chocolate Sprinkles and peanut butter, eat inexplicably bland cheese stored in the form of balls, cycle everywhere wearing clogs, are either tall or very tall, have an obsession with the price of everything,are often seen putting fingers in dykes whilst off their tits on weed,and live on barges or in windmills.......but we love them......I of course am talking in stereotypical terms about "The Dutch".
I've also noticed that they have an innate ability,like their close Belgian friends, to make near perfect minimal synth tapes for people in the UK to listen to. The UK sends all their Synth acts to America,where the Americans all have the impression that British men are all translucent skinned emaciated manchildren dressed in black PVC....or, in other words, are all in Depeche Mode...(er RIP the chap from DM who died yesterday by the way!).....rather similarly, the Brits think that all Dutch listen to Industrial Electronica and cruise sex supermarkets for entertainment. Any liberal European,or should I say 'Continental' country,especially in the EU,are looked upon by the British as a bunch of randy pervs shagging each other 24/7,which is why Brits only have sex on their summer vacations in these very same places often derided as Horny Hell Holes by the repressed UK psyche.....why do you think I moved to France?
Definitely not for the music!....okay....the Houses were Cheap,what other reason could there possibly be?
Well, this tape,if you are familiar with Doxa Sinistra's other tapes,is their best,and their first;....one can say that about so many others,but in this case it adds further credence to this undeniable factoid.
I like me 1970's synthesizers I do.I like to hear knobs twiddled buttons touched,sliders retracted,jacks inserted,Oscillators Oscillating;even other person's knobs twiddled, and yes, i even like to twiddle me own knob from time to time.
So now we've got 60 minutes of classically Dutch Industrial Electronica,all we need for the complete  experience is some chocolate sprinkles,and some off the shelf bondage gear from a Dutch Supermarket, and we're twiddling.
On a more topical note...there's a track called 'Soviet Invasion'...not only have the Russians missed out on the entirety of 20th century culture,they appear to want to miss out on the 21st century too...so be it. The bloke from Depeche Mode is dead, yet Putin still lives...there is no justice.
Hoofdstuk I:
A1 Intro Sinistra 5:09
A2 Khayanart 2:30
A3 Coolidge Effect 2:12
A4 Epsilon Albion 32` 2:31
A5 Via Del Latte I 0:50
A6 Ruhrgebiedt 2:32
A7 Soviet Invasion 2:09
A8 Kuomintang`s Space Blues 2:02
A9 Via Del Latte II 1:00
A10 Triangular Intermodule Computer Display Screen 2:22
A11 Via Del Latte III 2:08
Hoofdstuk II:
B1 Urkey Sticks (Visserslatijn) 2:25
B2 Alien 3:00
B3 L-Dopa 2:23
B4 Via Del Latte IV 0:35
B5 Web Of Tiggywaugh 2:35
B6 Entomorbide 3:05
B7 Maurizio`s Minestrone 4:00
B8 Modern Age 2:56
B9 Via Del Latte V 0:58
B10 Outro Sinistra (Live) 3:35
DOWNLOAD from the milky way the dutch way HERE!
Posted by Jonny Zchivago at 14:36

Oscillators oscillating... I appreciate the sense of humour peppered throughout your posts. You really could have been a dry cunt, as most "serious collectors" and curators of the rare and obscure can often be. And for the artists and small independent labels who are still releasing music, like Ende Shneafliet, it's great that you're re-circulating these amazing sounds and getting them attention in 2022. Cheers.

Yep, not a fan of record collectors,but i like records,music, and general pop culture. I also like the title of that Poison Idea ep: "Record Collectors are pretentious fucking assholes" I'm not a record collector by the way; i see it as a cultural commentator...or as they call it now, an 'Influencer'.