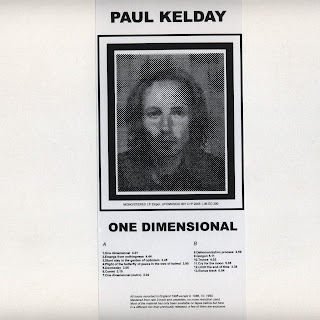 'Big in Sweden' isn't usually a subject that is risen in many conversations,and it doesn't even really apply to Paul Kelday;but, he seems to have an audience in the land of ABBA,Ikea and Volvo's,no matter how small. There have been a couple of post disappearance compilations of Paul's work that have materialised in the Swedish part of the Scandinavian peninsula. This "One Dimensional" release being one of them,but,uniquely for Kelday,it's on vinyl,.....300 copies of it.
Most of the material has only been available on tapes before but exists here in different mixes than previously released,and a few of them are even exclusive.Whoopee-doo.
I guess Lp's are as close to one dimension as you're gonna get in music enregistration.The other side is not visible,so doesn't exist until you turn it over,and viewed edge on, its just a black line hanging in a defined space.....unless its pressed on coloured vinyl,or as some clever dicks have certainly done before, on invisible vinyl.Place the disc out of sight,and the only clue of its existence is if it's playing,emitting a collection of waves.The nature of a wave is such that it can exist in more than one place at any given time and are invisible,detected by the Brain which then creates its own music based on the waves it receives.As we are all related,we hear the same thing ,which we have lumbered with the tag of "music".Whether lizards or virus's have this ability is up for debate,but one thing is certain,Music doesn't exist without the listener,and,the mammalian brain.
They're Big in Sweden I gather.....mammalian brains?
Tracklist:
A1 One Dimensional 4:01
A2 Emerge From Nothingness 4:44
A3 Short Stay In The Garden Of Optimism 3:45
A4 Plight Of The Butterfly Of Peace In The Web Of Hatred 3:00
A5 Doomsday 3:06
A6 Comet 3:15
A7 One Dimensional (Outro) 2:02
B1 Dehumanization Process 2:59
B2 Gorgon 5:11
B3 Trance 4:02
B4 Cry For The Moon 5:05
B5 Untill The End Of Time 3:38
B6 Bonus Track 0:54
DOWNLOAD sound waves for the mammalian brain HERE!
Posted by Jonny Zchivago at 11:00

thanks for all the paul kelday posts jonny! it's been great hear more of his amazing work. cheers!

Many thanks. Quite wonderful!

that cover, with the caption beneath it, looks like the worst dating site entry ever

Oh i don't know Northy...after many a failed relationship,and seeing the blokes they went out with after my good self,(one of them was the most one dimensional member of Gaye Bikers On Acid..lol!) One Dimensional is definitely a 'bird puller'...they don't want any secret dimensions. One of my ex's told me, post dumping, that she "Never had a clue what was going on in my brain"...funny that, as neither do I!....believe me, she really didn't wanna know what i was thinking.