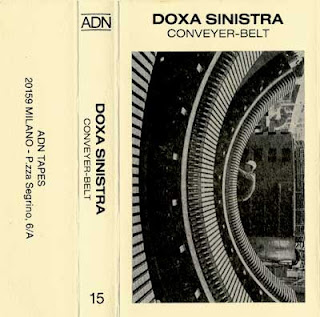 On the same cassette label that Phil,not Paul, Kelday's New 7th Music released a singular tape on,which fancied itself as one of those rather popular Industrial labels that we were getting sick of by 1985;just as this foursome of ambitious Dutchmen fancied their chances of being a popular chartbound Minimal Wave EBM Industrial combo.
Doxa Sinistra start off sounding like Donna Summer covering one of the sillier Depeche Mode industrial incarnations,and end up on the pretentious platform awaiting the next train to Bollocks-ville.
Anything describing itself as a 'Noise Painting' is to be steered well clear of.
However, a few of these tracks could be described as Minimal Synth classics,which would get many a string vested bondage and leather S&M trend follower working up a lather in his crotchless PVC underpants on the dancefloor on Gay Tuesday back in 1985,and for those of you who are too late for the trend,back in 2010 as well.So i guess we'll be donning our leather bikers cap,plastic trousers and chains again in 2035 if my graph is correct.This stuff never goes out of fashion for too long.
Have you ever noticed that when a Dutchman sings he sounds not unlike Professor Steven Hawkings's Speak and Spell machine voice...and this group are certainly no, exception.
Tracklist:

A1 The Late Jack Wright
A2 The Networkers Pts. 1 & 2
A3 Shunting-Yard
A4 Large Expanded Halls
A5 Conversation à la Chaîne
A6 Branoff 4
A7 The Enterprise
B1 Exploring Expedition
B2 The Other Stranger
B3 No Car, No Job
B4 Noise Painting, Tableau 1

DOWNLOAD the bastard offspring of master and servant and georgio moroder HERE!

While we're on the subject of Coventry,we may as well check out other groups from that gray city. One of the leading lights,and ... 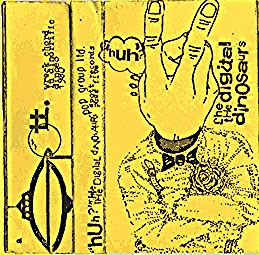