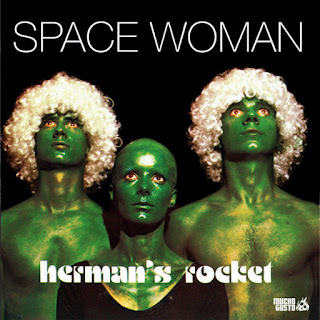 What did crazed French Progressive Space rocker Jean-Pierre Massiera do as soon as Punk Rock infiltrated the pop culture of every medium sized town in every medium sized country and medium sized brain in the western world around 1977? Why he immediately dumped his Space Rock past did the proper Punk thang to do and went Disco....but, this is NOT the Disco that we came to know and despise .Oh No!This was the Disco soundtrack to One Flew Over The Cuckoo's Nest starring a lobotomised John Travolta wiggling his hips to a crowd of medicated victims of electric shock therapy,shuffling around the secure unit dancefloor.The BeeGee's have painted themselves Green,renamed themselves the BeeGreens and wore blonde afro wigs after being treated with experimental drugs gone very wrong.
Nowhere was Disco music made so as incredibly daft and weird as it was in La France,except maybe in the former Soviet Union?
Herman's Rocket......what a band name.....is the nuts.Come on kids,let's dance and get high on some liberal use of Electro Convulsive Therapy....with a Disco Beat..er...in Space!
Tracklist:

I've only ever had a rip of Space Woman / Green Creatures #7 - and given up on locating the album long ago. Thanks!