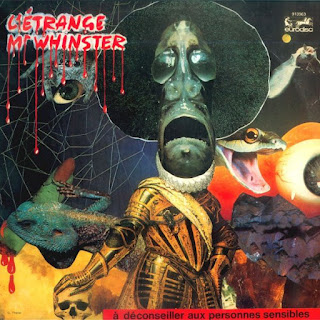 Whilst on the subject of France and things French,it is inevitable that something, or things,by probably the best french musician in this world ,and maybe the next, Jean-Pierre Massiera, would show it's horrific head.One of,but likely The best among Jean-Pierre's vast catalog of one off faux-group projects has to be Horrific Child.The cover says 'Buy Me' the music says 'try me',as it most certainly is an acquired taste,or lack of therein. Marmite, Brussel Sprouts, and Jean-Pierre Massiera,you either love 'em or hate 'em....me?....I like Brussel Sprouts but hate Marmite,however,I think he's somewhat alright.....for a frenchy.
Track one,starts off as a Lark's Tongues In Aspic part one ethnological forgery,leading into a lot of proggery pokery,and sounds like several random albums,field recordings and sound effects  records playing at the same time.Then it gets stranger from there.This chap is either completely Nuts,or he's trying too hard.If one chopped up a load of tapes and sellotaped them back together randomly,it would sound not unlike this.
Track two, is a spooky whispering Frenchman version of those Kluster records from five years earlier......is he nicking his ideas from previous prog projects of other persons,or just recycling them to make them better,or just different;if so the latter certainly applies.
Side two brings much of the same sound effects and moaning ladies,with some proggy string arrangements,bits of busy drumming,and ending with a nice tune played on an acoustic as if it was a Yes album after all?
This could cause complaints in an empty room!
The Strange Mr Whinster indeed.