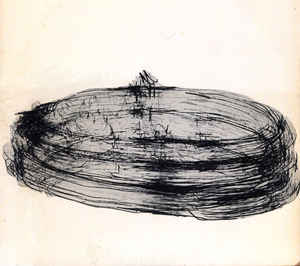 They certainly have snazzy titles don't they these 'minimalist' composers? Music with this, and Music in that, its like bottom shelf supermarket products.Biscuits are called Biscuits,chocolate biscuits are called Biscuits with chocolate, and so on.
Minimalism is certainly economical,but in a different way to budget econo-brands in the supermarket. Its the economical way they, the 'Minimalists', use instrumentation and melody that differentiates these compositions from such over-composed show offs like Mozart.
I nearly nodded off listening to this as i wrote earlier on,so forgive me if this sounds like the stuff of nonsense.This music does have a hypnotic effect,and makes time scurry by exposing it for the illusion that it is.I could listen to this all day,or is that for just a few minutes,such is the time distorting effect that Glass's music induces in its unwitting victims.

DOWNLOAD in a similar and very familar way HERE!
Posted by Jonny Zchivago at 22:19

Weirdly, this stuff helps me focus, and, consequently, keeps me awake. I can listen to some of those epic Morton Feldman pieces--more serial and/or indeterminant than minimal, but do these distinctions really mean anything anyway?--that last for hours and seemingly nothing changes, and not get bored or distracted. Feldman was good with the nameses too.

Morton Feldman was on an album called "Adoration Of The Clash" !? WTF!?

Looking at that now--who the hell is Doris Hayes? I can't seem to locate any info on her, but I really want to understand why she--or someone--chose that as a title.

Adoration of the Clash was an LP of 20th century piano music on Finnadar, which was a label run by Atlantic Records staff producer Ilhan Mimaroglu (who was also a composer, and wrote one of the pieces on the album). Most of Mimaroglu's music on record is really dense electronic and/or tape pieces, often including live musicians playing along; probably his best known is Sing Me a Song of Songmy, with the Freddie Hubbard Quintet mixed in with recitatives and musique concrete. As you can no doubt tell from the title, it was a polemic against the Vietnam war.

Doris Hays (no e in it, that's why you can't find her-- plus she later took the given name "Sorrel") was known particularly for her performances of the music of Henry Cowell.

And I forgot to mention my key point, sorry! When Mimaroglu speaks of the Clash, he's not talking about Joe Strummer's band! I think he means what Strummer meant, that when an enlightened working class unites to oppose the propertied classes, that will be worthy of adoration.

Interesting. I prefer that explanation for the clash to what I was guessing at from the little bit of the cover I was able to read--there was talk of tone clusters and such, and I was thinking, surely _that_ can't be the clash?! And I admire anyone who even attempts some of both Cowell's and Feldman's piano pieces. Feldman's stuff involve wacky time signature changes with practically every other bar--he could have done like Satie and dropped the bar divisions and instructed the performer to "play freely."