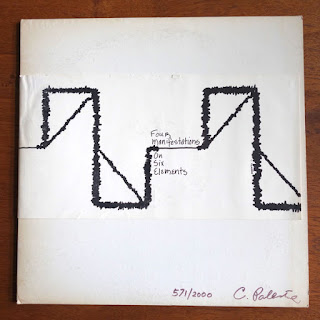 Like some kinda sound alchemist, Chuck Palestine began his crazy  more avant garde than thou creative life by blending sonic elements over and over again through years of non-chemical 'research',(read that as fucking about), searching for the so-called, 'Golden Sound'.Similar to the search of the thirteenth note,thus reducing sound to the essence of the chord or harmonic structure itself.
The resonant Bösendorfer allows Palestine to create a complex variation of tones, intervals, overtones and rhythms. "One Fifth" evolves by reinforcing the fundamentals of a fifth with their higher octave(it says here!?).....my brane 'urts! Each performance of this work is different as Palestine reinterprets these simple elements listening within them for variations of amplitude, mixture and inertia at the moment of the performance. "One + Two Fifths" deals with the way a rhythmic sonority sounds when the sustain pedal of the piano is not used, thus focusing on the rhythmic aspect. Gradually by adding the sustain pedal the external rhythmic pattern begins to internalize becoming an inert part of the whole tymbral fabric(wow!)- a piece expressing the battle of rhythm versus timbre for dominance.

Thats the technical shit out of the way.Basically track one and six are drones produced by the resonant capabilities of The Bosendorfer Grand with the sustain pedal fully engaged.The rest are more rythmic and repetitive without the Sustain pedal,which is slowly introduced to create waves of resonance that submerge the rythmic pulse somewhat. The final note takes an age to decay,and sometimes with this digital technology one can hear it being cut off before it ends on the recording....tut tut tut!
If you're caught in a situation when your clever than you work acquaintances request some Chalremagne palestine at your networking gathering in uptown manhatten, don't panic!Just moemorise the first paragraph wot i wrote above....They won't know what the fuck you're going on about and think you're some kind of intellectual Thresher Shark,nod wildly feigning complete and utter understanding,and concurrance.
Christ, humans are pathetic!?......"Hmmmmmm,yes, yes, genius....and what are your thoughts on Glass(Philip)?".....thats when the next batch of stuffed olives appears,along with some specially imported French cheeses.
"What are your thoughts on Clayderman (Richard)?"
It must be great to be Sofisticated?
Pina Colada anyone?

This stuff is actually way more fun than Chuck makes it out to be. This Fourier series applet -https://www.falstad.com/fourier/ - is pretty much guaranteed to keep all children entertained for LIFE. Just be sure to turn on the sound, unless you really like just looking at the waves. Important applications: synths and audio processing. Less important: rockets and space and crap like that, I suppose.

Charlemagne Palestine. Now you're talking! Perfect genuinely radical antidote to the air-freshener insipidities of CIA-funded cab driver Philip frigging Glass. Next up: For Samuel Beckett, For Christian Wolff, and For Philip Guston by Morton Feldman. Not forgetting his string quartets.