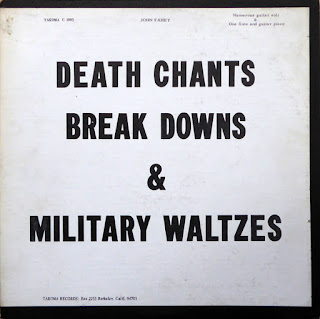 As much as there weren't many albums called "Death Chants, Breakdowns, and Military Waltzes" in 1964, this stuff still sounds like the background music to a fishing programme on the idiot box, with the odd nod towards the  'Paris, Texas' soundtrack, from before Ry Cooder was even considered for one of the guitarists berths in the Magic Band.
John Fahey continues his immersion into his american primitive character of Blind Joe Death with another slow unit shifter on his own Takoma label.
Its certainly authentic sounding, so its understandable that even experts in the genre would have been both fooled,and excited by its discovery. I guess Fahey used the same tactics of slipping a few copies into thrift stores to lay the opportunity for some Harry Smith types to 'discover' Blind Joe,and include him on their compilations of Bluegrass and Country Blues from the early 20th century.
I've often thought of doing the same with some forged UK DIY band albums that I would make here in the 21st century.But,I can't really be bothered.

DOWNLOAD your next breakdown HERE!
Posted by Jonny Zchivago at 00:08

When you muttered something about american primitive the other day, I thought about Fahey. I recently heard an interview he did sometime in the late 90 where is apologies for the reference, Apparently someone had asked him to describe his music and that was the best he could come up with the make the guy go away, and here it had become a defined genre over the years. He also complained about being tagged ‘the godfather of new age’ which in fact he hated, along with hippies and the grateful dead. Poor fucker, always in the wrong place at the wrong time.

For some reason I’ve recently been spending a lot of time revisiting his later work, which most ‘fans’ seem to hate. I dunno why they’re so upset with him playing electric. As for utilizing abstract noise, hell, he’d been doing that sort of thing since the mid 60s. “I hate mellow.” Good on ‘im. Anyway, for a few weeks and now I’ve been falling to sleep to the last album he released in his lifetime. Since you brought it up, I feel free to stain your palatial blog with a link of my own:

Now there's and idea. OK, shall make Fahey/Red Krayola available as above. Also, Fahey's Zabriskie Point sessions--alas, they're not as great as the idea of Fahey beating Michelangelo Antonioni, but still pretty good. Bear with me: our internet is obscenely slow, so it may be a day or two.

Ain't got Hitomi! Sad to say i wasn't aware of it.
Absolutely,Fahey's late 20th century work is far more listenable and far less boring. The godfather of new age is a rather nasty accusation that nobody deserves.

@parmalee, That's be sweet. I'm very familiar with obscenely slow internet, so as your able. At 6’5” and having a large frame, I wouldn’t want to pick fight with Fahey. Apparently the Antonioni smackdown is only urban legend, but I read that he came close to blows with big time label execs David Geffen and Elliot Roberts over Joni Mitchell trying to cut in as an opener one night. Supposedly they were giving him the ‘do you know who we are?’ routine when he advised them that ‘if you don’t get your asses and hers out of here in two minutes I’m going to beat the fucking shit out of you.’ They made a hasty retreat. The quote I’ve read was something along the lines of “Who does she think she is? She did the same thing to me at Swarthmore College. How many records does she have out? Two? Three? Well, I have twenty so fuck her!” Denny Bruce, Fahey’s handler at the time said he’d never seen John that pissed off. https://www.jonimitchell.com/library/view.cfm?id=4348

He was a pretty easy going bloke when I met him, but then again, I wasn’t trying to cut in on him.

Indeed,"Fuck Her"....as many of the laurel canyon cult did. She put herself about a bit lets say in a sucessful quest for fame.
I'd love to see footage of Fahey,or anyone, punching Geffen.