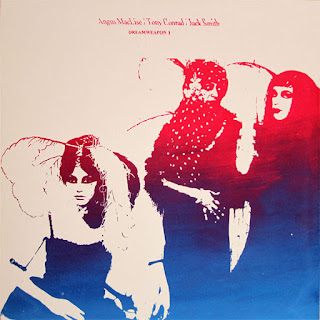 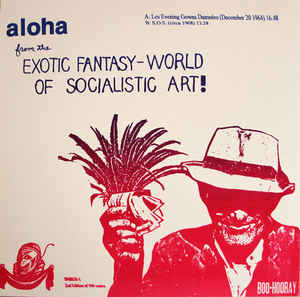 Aloha indeed, from the world of 'Socialistic Art'.....it gets better.....Jack Smith is acclaimed as a founding father of American performance art. And everyone LOVES performance artists don't they?
Whereas Angus MacLise is beatnik daddio numero deux after Jack Kerouac,and founding father of Hippy. Conrad gets off almost scott free,as he's renouned as the grandaddio of 'The Drone', in fact he spent the majority of his creative life playing one note. Now, that is what I call a Musician......the anti-Mozart.
These Live recordings of Angus MacLise, Tony Conrad, and Jack Smith come from from the vast MacLise tape archives, as donated by his wife Hetty.

Track one is a long spoken word piece, by the godfather of Drag, Jack Smith,playing the role of an imbecile as far as I can make out.
It's most entertaining.
Side B, is a ghostly,echo-laden ethnic drone piece with haunting Indian instrumentation.This could have been made yesterday,but no,it existed in the year of my birth,at the height of Beatlemania.And indeed could well have been a liminal influence for the Fab Four's watershed moment, "Tomorrow Never Knows"....so at least, it seems that Yesterday did know....and probably still does if you look in the right places.
Certainly an archive recording that will impress your intellectual friends from the near mythical 'Metropolitan Elite' that are being blamed for alienating the honest working man of nothern England, who then voted for the 'Poundland Trump', Boris Johnson in that joke of a General Election in the UK. Almost makes one actually wanna be part of the Metropolitan Elite......the politician and his traitorous supporters that is....not the music.
This music exists outside of Politics,outside of Intellect,and outside of this crumbling dimension,or,our crumbling Dementia?

DOWNLOAD your dream weapon HERE!
Posted by Jonny Zchivago at 16:38

love all this MacLise stuff thanks! These dreamweapon things are hard to find on www

Stuff that makes you wonder