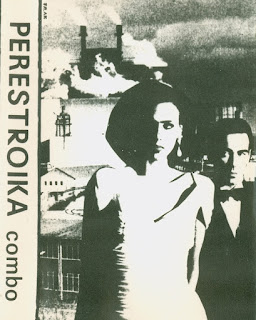 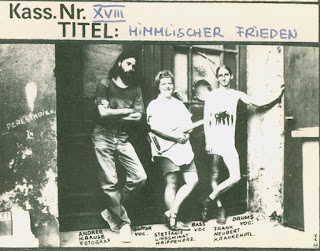 Back in the good ol' DDR,The marvellously named Perestroika Combo,appeared on cassette tape around the time the East German regime was in its death throes.Hence they wore their politics on their sleeve,naming themselves after the Soviet policy of Perestroika,or Restructuring,which was official state policy;so in a way they were colluding with an oppresive state,which is another way of looking at it?

So,as the members of the group came face to face with 'Freedom', which meant unemployment,poverty,and prejudice for yer average East German, they revelled in their new status as legal musicians and entrepreneurs;I assume they sold their cassettes?
So,we have, Voda Tudor on keyboards; Andree Krause on guitar & vocals; Steffanie Lingsminat on bass vocals; Frank Neubert on drum & Holgar Kaack on guitar/vocals.Considerably more members than are pictured on the photocopied insert.
I wonder if any of them suffered the common maladie of most former-East German citizens;that of 'Trabant Nostalgia Syndrome'....I just made that up....but, the Trabant,the peoples car of the DDR, became a symbol of a weird kind of nostalgia for the old country and its institutions.Like some kind of mass Stockholm Syndrome,where one misses the security of your oppressors,and the familiarity with the benefits of the nanny State.Many wanted to climb over the wall and go back in.Most were happy just to visit relatives and shop in the supermarkets with the 100 marks welcome gift provided by the West German government, then go back to their gauranteed Job,subsidised housing transport,and the freedom 'from' choice that a communist state provides. Who in their right mind wants to choose from hundreds of different types of shampoo when you only need one?
The music of the Perestroika Combo would not have gone down well with the authorities however.Dischordant and unmusicianly as it is.Obviously influenced by the music broadcst on late night Western Radio,but with that dark edge that came very naturally to those in the East.Full of Glasnost,but the opposite of Perestroika;more to do with de-structuring rather than re-structuring.Which is how we like it, isn't it kiddies?

DOWNLOAD to your escape tunnel of the mind HERE!