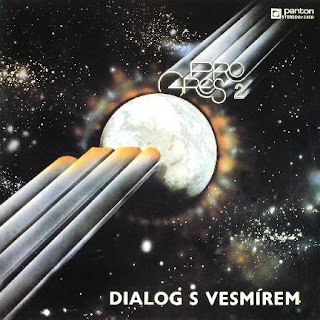 Typically for the eastern bloc, Progres 2 were formed over a decade before they had their debut album put out by the state.Around about the time of the 'Prague Spring' uprising.
No room for teenage troublemakers over the other side of the wall....not on the state labels at least.Especially after the Soviet Tanks rolled in around 1968.
If you couldn't grow a bushy moustache they didn't wanna know.Back to the chemical plant and those adorably slack health and safety regulations. Teenagers with green hair in the soviet bloc were not generally adolescent rebels with a handy bottle of hair dye as a rule.Their verdant locks came courtesy of chemical poisoning at work, or they lived within 50 kilometers of a state industrial plant. So most musicians who lived on the wrong side of the Iron Curtain were often near death by the time the debut album got out.
At least Progres 2 seem to have survived their pre-fame era intact, as this complex and symphonic Czech-prog classic attests.

DOWNLOAD and make progres towards an end of all this eastern european prog HERE!
Posted by Jonny Zchivago at 11:03