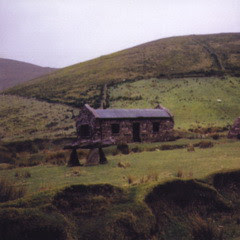 Like a piano player in a deserted bar at 4am,Jandek helps you stare into your half-empty whiskey glass, and decide to end it all.The most pleasant method is apparently inhaling an inert gas, such as Argon,or Nitrogen.A feeling of euphoria accompanies ones dying moments,and seeing the faces of dead relatives is allegedly a distinct possibilty. The least pleasant method is doing it whilest listening to a Jandek record.His primary purpose is to reveal the bitter-sweet charade of existence in its naked form via the medium of music.He seems to be in touch with the long forgotten ancient art of understanding our brief tenure in this permanent 'now'. Resurrecting a long dead paganism (represented by the picture of the Dolmen on the cover?),which at least identified our real gods, the sun and the stars.

Basically you're a ghost driving a meat-coated skeleton made from stardust....what do you have to be scared of?

The nine parts of 'The Cell' ,a metaphor for the human body I assume,was recorded live at the Centre for Contemporary Arts, Glasgow,on May the 23rd, 2005.And marks the first release of Jandek on Piano,backed by some understated contrabass,and percussion.Our Corwood Representative, mumbles a slew of existential ramblings above his largely tuneful ivory tinkling.
Don't play this while relaxing in your flotation tank, or you just might drown yourself.
You have been warned.

DOWNLOAD the liberace of misery HERE!
Posted by Jonny Zchivago at 10:55

If loving you is wrong...

I think the link is dead.
Keeps trying to generate a new key.

Bloody Hell you're right!?...thats weird!...I'll have to reup it, will do it in the morning 'cus i'm going to bed.
Nighty Night.

Thanks Jonny! I love these uploads. Keep up the great work.