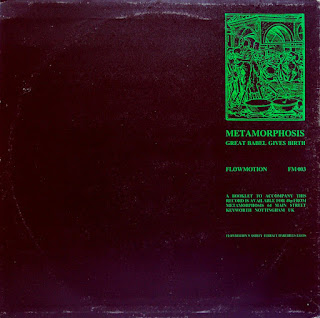 It might seem a great leap sideways to go from Jandek to a forgotten Industrial group native of the east Midlands of the UK;but musically i think they would have made a very fetching couple if wedded in the church of unpopular music. The representative's ear wax rattling moan would have been the missing icing on this particular cake;so what we're left with is some backing tracks left to posterity like the room of a missing teenager left as a shrine to better days by their destroyed parents.
These experimental industrial funksters came from Nottingham if my memory serves me correctly.Normally I would be slagging them off about football,but recently Nottingham (pronounced Notts Forest to wind 'em up) Forest,a very shit footy team from Nottingham,had the audacity to knock the great Leicester City out of the cup 4:1.Leading to much humble pie being consumed by their more successful Modern Era rivals from twenty-odd miles down the A46.
Musically, Nottingham developed in a dumping ground for every genre of Metal you could name in 60 very dull seconds, and home to Earache Records.
So apart from Medium Medium, a gang of four-a-likey, they manged to produse a peripheral Industrial act in the same mould as the very inconsistent and unduly praised 23 Skidoo.
Nowadays Industrial means endless varieties of that 'Harsh Noise' stuff,but back in the post Throbbing Gristle world subtlety was the way,and more emphasis on the creepy rather than the crawly.
There's low budget Gamelan ,which certainly seem to be saucepans,some filled with water being struck here, and my personal favourite alt-synth device, the Short Wave radio.Of which there's not enough of in these darkening days.
With the impending fall of the new Iron Curtain, i'm hoping for more weird spy transmissions and persistent blocking dissonance to be sent skywards(.....check out the Conet Project numbers station post HERE!  )
They could have been 24 Skidoo if they had had a funky drummer,or maybe even 25 Skidoo if they had a Jandekian Singer.

Metamorphosis, previously known as Tiab Guls (see elsewhere on this blog), were inspired initially by 23 Skidoo then swapped to AMM inspired noodling before irrevocably splitting up.

AMM and "noodling" should never appear in the same sentence. But ok.

I remember when the other guys in Can gave Holger a lot of stick for putting down the bass and picking up the shortwave, but I was like, what's the problem?

I'd actually forgotten that I owned this back in the day.
Thanks for the opportunity to hear it again.

Kieth Rowe of AMM used to be able to play the radio and the guitar at the same time....so no excuses there Holgar for putting down the bass.
Noodling is not an adjective i would use for AMM however, but there are lots of improv units who certainly do noodle.

Just popped in again looking for Insane Records back catalogue – which *of course* you've posted – and spotted our old LP recently up. Okay ;)

It was influenced by all sorts of things, as I recall, but in between our industrial and improv phases. Tiab Guls (name from the backwards version of Second Annual Report - nothing clever there) were the former. Threepenny Group (post Metamorphosis) were the latter. We actually played a gig with AMM - one set each, followed by a joint set. I may still have a tape of that in a drawer somewhere.

Last time you posted something of ours, I remember downloading it and not being too impressed. But maybe I'll give this one a go some time.

Incidentally, your favourite bit - the Short Wave radio - was just MC by himself.