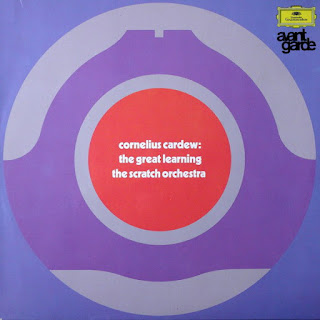 When Cornelius Cardew wasn't wasting his time preaching marxist philosophy to the converted ,or more likely, unconverting the converted with his terrible Pinko Pop music; he was following his interest in Indeterminacy, having rejected serialism after witnessing a John Cage and David Tudor concert.
He was soon to reject the avant-garde and turn to Rock music and being a political bore. Its not as easy as it sounds to just decide to make popular music,as he found out,and its slightly arrogant for any trained classical musician to assume that they could, It may sound simple,but Rock and Pop is far more sophisticated than these self-elevated intellectual giants seem to think it is. I've written years of blog posts on the issue,and still don't fully understand it myself.The key is to bypass the 'Thinking' process,something I think, there I go again(!)...something that Cardew did far too much of.He certainly had a terrible thinking problem.
However, I do admire the brevity of his "Scratch Orchestra Constitution", which suggests a lessening of the rules of music, and increases the inclusivity to non-musicians,in a loosely controlled form of musical anarchy.
After the  greatness of this solitary Scratch Orchestra album,which i have expanded with other existing Scratch recordings, he appeared to lose his mental faculties,labelling virtually everybody but himself a 'Fascist', including David Bowie, and the whole of Punk Rock in an article for some dull Communist journal called "punk Rock is Fascist",denouncing The Clash as reactionary.....well spotted,slightly hypocritical, but again written by someone who didn't understand Rock or the people he wanted to 'Liberate',he also looked unerringly like Joe Strummer with a rubbish haircut and bad clothes.
I saw another article entitled rather provocativly, "Cornelius Cardew; Visionary or Twat?"....hmmmmm,good question.
Again,this is an occassion when one must elevate the 'Art' above the man, like Gary Glitter, and concentrate on his Scratch Orchestra and AMM moments.
"The Great Learning" is a lengthy, droning,free drumming experience with the choir from the Omen soundtrack but played at 16rpm.
It sounds like an after death experience,with snatches of birdsong and the odd,very odd, referees whistle interjection......always a recommendation I find.
We just need VAR (Video Action Replay system used in Football) to determine whether he was either Visionary or Twat?

DOWNLOAD the great unlearning HERE!
Posted by Jonny Zchivago at 09:22

Cardew may or may not have been an excellent composer/musician but he was certainly not a Socialist/Communist. Communism will be a society when the working class recognise their class interests and in a democratic movement overthrow capitalism. To replace it with a society when people will take for their self determined needs and give to their self determined abilities.
Cardew was a Trotskyite and sometime Maoist, i.e. groups who lie, along with Tories, Labour, SNP, SWP, etc., that capitalism can be reformed so that all can share in a wonderful fulfilling life.
If you are going to make political judgements on your Blog could I suggest you at least take the time and post the truth not what I would expect from main stream media such as The Sun, The Guardian, The Express.
Thanks for the music though. Some excellent choices. I don't include the Cardew shite of course apart from his contributions to AMM

Ahhh fuck me...i couldn't give a shit what he was...communist will do.It doesn't matter....we just wanted him to shut the fuck up.Trotskyite or monster raving looney fucking party. That the limit to my political judgement....and you tossers wonder why nobody listens to you.Enjoy your diminishing ghetto and fuck off.

Didn't he take issue with Stockhausen too, along with everyone else?

I wanted to hear this back when and had to shell out something like £20 for the CD if only I'd waited and invested the money in......boxset refresh

Yeah,there's a full 4CD 7 paragraph version of The Great Learning by some Polish geezers.Was thinking of posting that,but it doesn't have the great man on it,so i'll leave it at that....also can't be arsed to upload 4cd's worth of data....its rather good however.

@ Nick..I dunno what went on between Corny and Karl,but knowing Corneliyus,he almost certainly had issues with everyone,including a certain experimental german composer.I doubt he labelled him a facist though.....not appropriate.

@unknown...your sarchasm is not unwelcome.its a pity it didn't begin before running through a list of communist sub-genres,and utopian fantasies.

Never read Cardew's "Stockhausen Serves Imperialism" and don't intend to, but Stockhausen did have a habit of saying awfully racist stuff on occasion--didn't he consider "black music" to be inferior? Then he'd have a handy excuse, like he was traumatized by Nazi radio broadcasts or something, but that doesn't really cut it.

Thanks for jogging my memory Parmalee

John Tilbury and the lovely Michael Parsons reformed the Scratch Orchestra to perform this piece in its entirety for the first time in 1984.Nag and I were on board for that trip. If I remember correctly the whole thing lasted about ten hours - split over two nights at the Union Chapel, Islington, London. We discovered the Stockhousen Serves Imperialism book at that time and it prompted us to simultaneously treat The Great Learning with the utmost respect whilst also incorporating as much anarchy as the piece would tolerate. There were some 50 or 60 of us, classically trained musicians, improvisers, and Non-musicians.
A core of some 30 of us carried on meeting subsequently under the guidance of Michael Parsons and did a number of performances at the LMC. We played pieces by modern composers and by people in the group (which never really got a proper name).Adam Bohman wrote a piece that basically involved everyone muttering, then singing/crying/screaming the words Barry Manilow!
In 1985 someone was filming a biography of Cardew. John Tilbury got the SO back together for two days of filming at the Union Chapel. The director bossed us about and couldn't be bothered to explain what the film crew were doing or how this material would be used in the film. They told us to wear the same clothes the next day for continuity. A small gang of us decided to wre k the continuity by getting haircuts half way thro day one and swapping clothes. I set fire to a ukulele that I was playing, just before the director asked if we could repeat what we had just played, so they could shoot from another angle. The music was unrepeatable anyway......

Wow Bendle....you were in a Scratch Orchestra!?
The saga has a new chapter.
Would have like to hear the Barry Manilow one captured on a cassette,or cassettes.