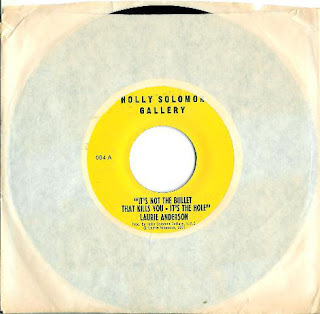 Think of saxophones in rock and someone always mentions Jazz.Think of violins in minimalism and you think Tony Conrad and Henry Flynt.
Yeah, Laurie Anderson was a minimalist performance artist who played the Violin,rather more in keeping with the Henry Flynt angle than any Tony Conrad one note symphonies;but blending that with minimal electronics and darkly humourous spoken word passages,not unlike Robert Ashley's work around the same time,and this is a record of that time....see what i did?
Being charmingly eccentric looking,and a lady(oh what a novelty,a lady allowed to show intelligence!?),she managed to score one of thee most unlikely top ten hits in the UK charts,with "O'Superman".An Avant Garde work at number two in the charts was,and still is, a rare beast,but i think 'the public' approached it more as a Novelty record than anything weird.After all,you don't get much weirder than a Novelty record.
This unexpected sucess allowed her be more ambitious,and an audience would actually turn up for her huge "United States" multi-media opera.The centerpiece of the show is Laurie's digital aria "O Superman". The William Burroughs inspired "Language is a virus" preceded by "Difficult Listening Hour" where Laurie speaks through a filter that gives her voice a deep Burroughesque edge. Laurie plays with language, objectivity, experimentation and,typically feminine, with logic.
Of course in her early days,before becoming Mrs Lou Reed, poor cow,he used to hang out with Burroughs,Giorno,Ginsberg and all those 'Dial-a-Poem poets in New York and appeared on a few compilations before John Peel in the UK discovered her "o'Superman" single,and success,a 'second album' with a budget,and Peter bloody Gabriel beckoned. Not content with exploiting the indiginous peoples of the third world,our second favourite public schoolboy The first place goes to Joe Strummer of course!) wanted to bland out the avant garde too.
This is Laurie Anderson unsoiled by fame and popular acceptance,the two most terrible blights any artist could be set upon by.

Thanks for putting this all in one place!

Did PIL have any songs with a reggae style trumpet? Some hot babe, nikasip, is playing that in her cam room, unusual, now.

I do still love those two 1977 tracks from the 1750 Arch album for sentimental reasons. That whole album was the shit. When I was still young and wasn't bothered by ludicrous first world white person pretentiousness that makes me vomit now.