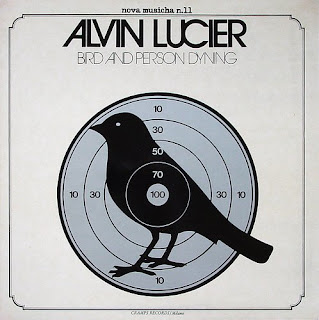 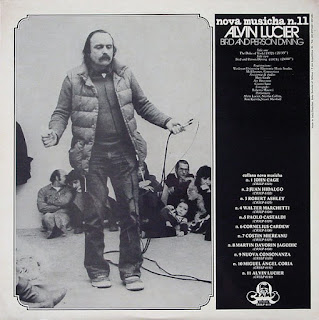 Heavy Cage and Tudor influence again with this one.,especially with the processed voice on "the Duke Of York", which sound like a man trapped in a circuit fried computer which is slowly being shut down, like HAL in "2001", except this time the rhyme is "The Duke Of York" rather than "Daisy Daisy". Its basically the cry of the trapped human soul imprisoned in a cacophonus sarcophagus of flesh,the death of the soft computer....I suppose this is where the idea of downloading the human essence into a hard drive to escape death rears its unattractive features once again? It's a most haunting piece of work.
The "Bird and Person Dyning", not dying, side, could be the start of electronics emulating something else? Its basically processed feedback and an oscillator chirping like a bird for 25 minutes.
Like a Nightingales song as heard by a person with raging tinnitus before the fatal shock wave hits.

DOWNLOAD in bird and person HERE!
Posted by Jonny Zchivago at 22:01

"Dyning" is short for "heterodyning", a method of changing the frequency of an incoming radio signal by adding it to a signal generated within the receiver to produce fluctuations or beats of a frequency equal to the difference between the two signals. So, for us, a cool way to mess things up.

I'm usually not too much into this kind of stuff. My criteria for anything experimental are: Is it fun to listen to? Or moving/resonating with something inside me? Would I ever voluntarily put this on? In this case, with the "Duke" side, all three criteria are met! Thank you, had never heard of this guy before.

Btw, according to Discogs the first side was "composed in 1971, and this version was recorded th 19th of February 1972, at the Metropolitan Museum of Modern Art, New York."

Yes,Alvin has done some real interesting experiments....you gotta love "I am sitting in a room" surely?
Ters also his music for solo performer,which uses his and pauline oliveros' brain waves to make the music.

hi kreg, yeah i may do in the future.It depends upon where the blog takes me...at the moment it's outsider rock/folk,it won't take much of a twist to get me back on musique concrete again.

thanks, would be great to hear it

A REALLY huge influence on industrial music bordering on reckless risk taking avant-garde bands such as Whitehouse and Nurse With Wound...indeed William Bennett has lauded this as Whitehouses' single biggest influence along with Yoko Ono Cro Magnon Tangerine dream and others!

Thank you for adding this and other releases from the Cramps label. Any chance of sharing Petr Kotik's First Record?