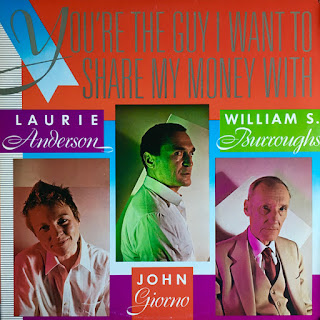 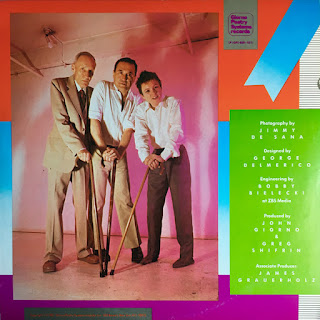 Ahaaa, 'Poets'.don't cha just love 'em?
I sense a ruthless vitriolic attack coming on...but,wait....No,I say. That would be too obvious.That's just what you expect me to do,because I'm clearly a bitter and frustrated failed Poet myself.
Not true children, Not true....I like these poets, and most of the poets,slash,writers who exist within the Giorno Poetry Systems stable.There ain't nothing poncy about this bunch of  vicious malcontents, who use their words like razor blades sectioning major arteries as if they were chilli peppers,scraping out the seeds and throwing away the husks for the dogs to fight over.
Laurie Anderson is ,obviously, 'the nice one' of this particular trio,teetering on the cliff edge of fame and impending chart success.
Whereas the imfamous William Burroughs,had different kind of fame,being the censorship baiting voice of the post hippy generation.Laden with the job of describing the real world as we chose not to see it.
John Giorno was a kind of proto-ranter,whose no-holds barred descriptions of the seedier underbelly of modern existence are delivered with an unappealing nasally whine through a delay echo to increase the uncomfortable nature of his poems,slash, rants to the point of sticking ones fingers in ones ears.Almost as if one didn't wanna hear what Giorno was saying during these relentless verbal barrages.I have to say, Giorno's poems are much better heard when someone else reads them out,just like I thought Bob Dylans songs were better when someone else did them.I now know both of these preferences to be very wrong.
I love the cover art of all these Giorno Poetry Systems albums,with their sharply focused glossy magazine style photography and graphics.Its as in your face and intelligent as the acidic words on this shared double album.

DOWNLOAD because You're the guy i wanna share my poetry collection with HERE!
Posted by Jonny Zchivago at 00:15

Ripping this one from vinyl is a real challenge, what with the 3 interleaved grooves on side 4...never know which track's gonna play.

Bought this back in the day and yes, that thing with the 3 parallel grooves was a lot of fun. Much more so than pressing a "random play" button or whatever digital substitute there might exist.