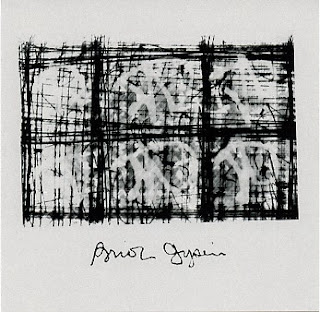 Here we go again.....anyone called Brion,not Brian,or Bryan, is certainly posh and reeks of privilege. With a brief bit of research these suspicions were confirmed.Educated at a Fancy public school near Bath (UK),and by the age of 18 he was studying at the Sorbonne in Paris. Hangin out with the likes of Max Ernst's missus, Salvador Dali and Picasso in the "Surrealists Group", from which he was inexplicably expelled by André Breton,as happened frequently were i came from,all at the age of 19. Needless to say,if you were of modest means it would be extremely doubtful you would be anywhere near André Breton, never mind being expelled from the community centre for crimes against Surrealism. I, for one,was never sent home from the local underclass abstract expressionism club and ,thankfully,never had to explain to my mum that Mark Rothko had me expelled for not being abstract or expressive enough,and could I invite Willem de Kooning over for beans on toast later?
The only art happening where I came from, was the odd swastika sprayed on a wall over the admitedly abstract phrase of "Pakis Out"*. Nowadays those very same 'Pakis' are spraying stuff like 'Brexit Now' to get rid of the Poles. Epitomised by the new tory Home Secretary, a child of ugandan asians,who is determined to shut the door on any more poor immigrants...like her parents were? Fucking Insane!
I don't wanna go through Gysin's life story, but lets just say, he never seemed to need a job,and drifted effortlessly around the globe meeting up with famous artist and bohemian types of all statures.
Most famed for the re-invention of the Dada-ist 'cut-up Technique, which was in fact nothing new,and gave it to William Burroughs to mess around with.Burroughs explained that Gysin was "the only man that I've ever respected in my life. I've admired people, I've liked them, but he's the only man I've ever respected."...slightly arrogant?
I suspect that Burroughs was the victim of that intellectual arrogance that all Public School boys,and upper class twits in England get drip fed at birth,even if they know fuck-all,which generally is the case.I'd say Bill respected Gysin because he was intellectually intimidated by those insideous British upper-class vibes,as most Americans are.
As far as I can see Gysin was just more inventive in his stealing from the past,and could explain it all away as his own doing, without actually saying so.
However These writings and sound experiments were a considerable influence on the Industrial Music,and culture of the late seventies......so says I.
Gysin enjoyed messing with language ,what makes a word a word,and how easily words change their meaning,or effect, by just rearranging a few letters or their speed.One short phrase could be transformed into a new language......or,as is the case in most of these pieces,into complete stuff of nonsense.
The same could be done with sounds,as in the Pistol Poems,with vari-speeded recordings of a gunshot,which he made for the BBC. A resurrection of another Dada-ist idea,'The Sound Poem'
This CD has all of Gysin's most influential recorded moments collected in one place.
Best listened to with one of Gysin's other claims to fame, he and Ian Sommerville's "Dream Machine",which was probably just the work of Sommerville,and Gysin named it afterwards?:


*Paki is a derogatory term used generally for anyone from the asian subcontinent,and is even used for Arabic and semetic people by the ignorant.The equivalent of the 'N' word but for asians. I've even heard it used by Indians as an insult to white people, as in "White Paki"......its crazy ol' world out there innit?

Such a pleasure to be provided a dayly text from your 'plume'.

Thanks, openly, for your stream of commentary AND the music .

Thanks again, Jonny.
Was listening to Ashley's Wolfman earlier today and reflecting on just how much I have enjoyed the last few weeks offerings

I was wondering whether the likes of Bob Cobbing will make it onto the blog as you appear to be steering in some really interesting directions of late?

Yes, there will be some Bob Cobbing as i will be switching to UK spoken word stuff soon.Which have to include Ivor Cutler too i guess.....and a few Ranters,like Seething Wells etc....maybe some of those weird BBC word plays,with electronic musique concrete backing,delia derbyshire etc,which will have to in turn lead to early electronics. Eventually we'll get back to normal music,but i'm enjoying myself.


A couple of days ago, writing about LIFE IS A KILLER, JZ noted how godawful the 'music' used by Giorno and others on that record is (I couldn't agree more). There is one recording from that period (that I know of), in a quite different vein, that brings poetry and music together in a way that enhances both: in 1981 Brion Gysin recorded SONGS with the Steve Lacy Sextet in Paris (issued and reissued on Hat Art). Having a group of jazz musicians, who had played together for several years by that point, interact with each other and Gysin's poetry works really well (for me, at least). The whole thing can be found on a popular video hosting site.

Does anybody have suggestions for similar recordings?

Looking forward to whatever comes.
Thanks Jonny.

Being a pleb/prole m'self, the first time I ever heard of ol' Broz (Bri/o/an) was when I got into TG as a youngster. I remember thinking along similar lines, "a toff that seems to have an inheritance of some-sort." Anyway, I t'ought he was a rite borin' twat, but on the bright side, TG still makes me happy in some funny way.
Is everything redundant? Mmmm, I think it may be so.
All the best from Anders Lagerstrom in Australia!

Yeah i still enjoy my TG tapes,especially the live ones. I listen purely from a musical standpoint nowadays.But many of the predictions of Industrial culture have sadly come far too true.Like.... Chris and Cosey(Industrial Records) threatening me with Legal action if i didn't take down my TG posts.....it seems they never listened to their own records,or at least never meant what they were making music about. Gen couldn't care less it seems. I was advised to tell them to fuck off....sorted.
Cheers Anders Foasterslagerstrom

Fosterslagerstrom! Bloody good one! Thank you for my new "internet-nuisance alias!"
It disgusts me that people from TG would threaten you with legal action. I recall that you mentioned that Mr W Bennett told you to cease and desist; was he 'nice' about it, or a bit of a tool?
Another thing, the term 'Paki' never was offensive or derogatory in Australia. The Pakistani cricket team that arrived regularly here to play used to be referred to as 'The Pakis' on TV etc. We just thought it was like calling an Australian an 'Aussie.' Just sayin'
Yours,
FLStrom.

@Fosterslagerstrom .. Mr Bennett couldn't have been nicer actually..no threats, unlike the boring two from TG......Zoviet France were assholes, and as for the twat from Crawling Chaos, i hope he catches Co-Vid 19.

I know you aussies are numb to offensive remarks, but i assure you that Indians don't like being called Pakis,and the history of the owrd in the UK has darker conotations.

I find being called a POM offensive, so carry on.You bunch of bloody convicts.

Hi J.Z (Jay-Z??)
I suspected the unusual Mr Bennett may have been polite.
No-one knows what POM means and it's rare to hear these days. Seriously, when was the last time anyone called you a POM?
The old days of Aussie 'numbness' are long gone. Australia now is like one big child-care centre. Which is understandable, considering that everyone in a position of authority in this country is descended from a convict that stole a loaf of bread or shot a King's deer in o'er to feed his family.
FLS

Yep, Jay Zee here, would you like a go on my wife?
POM, got called that in the seventies last i think....i got Aussie relatives.
POM(ME)...Prisoners Of Mother England?....no-one really knows...or cares for that matter.

Goddammit, you're a f__in' funny bloke JZ. Not jokin'.
I seem to recall that intellect toffs down in Ozlandia were embarrassed to come from the land of Ritchie Benaud (whose surname sounds like a garlic-guzzlin' froggie barstard) came to the conclusion that the term 'POM' could not be traced historically in any way at all.
All those old blokes calling English people 'pommie-bastards' back in the day had English surnames anyway. The never-ending circle of bullshit...
Best of luck,
Fosterstwattin'lager!