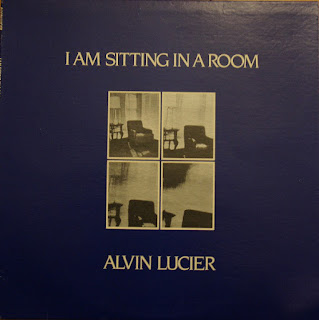 Hey i'm sitting in a room too, different from the one you're sitting in,and different to the one Alvin sat in.Wow! my mind is blown. Is this thee Alvin from Alvin and the Chipmunks?
I won't explain the concept of this piece of electroacoutic music,because Alvin tells us over and over again in that room,different to the room you're in,and different to my room i'm currently sitting in.He records this explanation and plays it back into the room repeatedly,and records it until the acoustic properties of the room take over and Luciers voice disappears into the resonant noise of the room.
I'm no longer sitting in this room, i'm lying down ,and if i had a flotation chamber i'd probably deposit myself in there,as this is a very hypnotic piece,if not a trifle spooky. Where did this noise come from? Is it the sound of the missing elements that stop the universe from expanding infinitely,or in this case,collapsing.
Forty minutes in, and i'm starting to see dead people, how's 'bout you kats?....grandmother is that you?....she's telling me to move away from the light...it isn't my time yet.
Scheech, this record opened a portal into the after life, and from what i could make out, it looks fucking BORING!
Whatever you do DON'T kill yourself...you will regret it! ....and I ain't talkin' Hell here!

DOWNLOAD while you are sitting in a room HERE!
Posted by Jonny Zchivago at 09:24

Ditto, sitting in a room here too,digging your blog.

I've not heard this one before and I do enjoy a bit of Alvin Chipmunk.

Anyway I was lying in bed in a room thinking this is going to annoy the shit out of me and it'll have to go after 5 minutes. Much to my amazement I crossed an astral plane bumped into Jonathan Richmond then reached an eternal void. You probably don't even have to take drugs for this true psyched out experience.

0tim space debris, it is easier for a camel to pass through the eye of a needle than a RICHMAN,or a richmond,to enter the kingdom of haven.....god said that fucker!

Many thanks for this.

Thank you for the very funny bits about the expanding/collapsing Universe,about seeing Dead People and the boring afterlife.
I am a big fan of this masterpiece of accoustic research and could catch a rare live performance in Berlin, wher the old dude was deservedly praised and applauded like the Rock Star of experimental music, but he had difficulties to pass by the security who tried to tell him that this festival might not be the right place for him, not recognizing him and probably thinking he was just an old guy gone astray in the Berlin Nightlife...