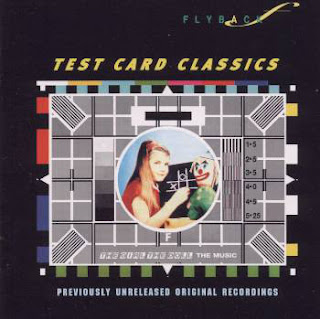 This is musical Heroin for me.
Like lying back in your mothers arms,unless your mother was a violent alcoholic of course, and having all those shitty adult problems melt away like plastic earmarked for recycling in a council incinerator.
This takes me back to those days off sick,when one was left at the mercy of daytime television,or lack of it back then,or when I bunked off school to avoid a test or the shower after basketball,or just to avoid the horrible sport of Basketball itself; then came home when the parents were at work and there was fuck all to do!...so we watched the Testcard!? Which was the equivalent of watching something like "Celebrity Love Island" today, but more entertaining, and lacking the suicides.
Those of you who came from countries with no public service broadcasting organisations will not understand......and that's ok.I won't hold it against you;but here's your chance to catch up.
Basically,You haven't lived until you've bounced yer booty to "Holiday Highway" by the Stuttgart Studio Orchestra.
And the Nu-Right wanna shut the BBC down????....leaving us at the mercy of Facebook and the Flat Earth Anti-vaxxers!.....i'm sure that's an actual band????

Compilation of test card music as used by the BBC between 1966-1984. Previously unreleased original recordings.

Dates diven above are first and last years of transmission, not necessarily consecutively.

DOWNLOAD the music without the girl or the doll HERE!
Posted by Jonny Zchivago at 08:53

HI Jonny - there's a 10 volume box set (Test Card Music) - it was recently put here - https://zokyat.wordpress.com/ (that's Instrumental Music Cafe)- all links still working. Fill yer boots. Thanks for all you do, A

I want to hear this if only for the selection of names listed. A rather Teutonic collection for BBC testcard purposes.

Woah! careful now - that's some powerful Proustian stuff you're messing with there - make sure you don't mix it with, say, 'Kes' 'The Singing Ringing Tree', Lucozade or Old English Spangles - you could easily overdose. As my mate, Welsh Mick, likes to say - 'It's ok to look back, but you shouldn't stare'

Ah yes. This was one of the very early "biggies" when the lounge boom was really rolling circa 95-98 or so. (I believe the most important kickstarter release for it all, so to speak, was probably the first Sound Gallery comp.)

But when this came out, I clearly remember it getting a glowing review in Record Collector, and the guy saying, "these people have released one of the most important easy collections so far - and they probably don't even know it." Which was all I needed to hear at the time.

It's weird how a lot of easy/lounge stuff now sort of operates (for me at least) on like a dual set of nostalgia tracks - both from the original time they're from, and then that 90's boom when the floodgates opened and so much of it became available again.

I could post a hefty list of what I consider to be essentials in this area. If I see people expressing interest, I shall be back to do so.

Thank you for this Jonny. I'm 5 years old again and sitting in front of the telly. It's like having my own time machine available to me.

Northfield (and anyone else) - will expand upon shortly. Got some stuff to deal with first.

i too express an interest so i do

Alright - once I started this I realized if I kept it up, it was gonna go like three fuckin' screens - so I'll be brief as I can, and can do followups if and as needed. (Perhaps in the comments/contexts of these potentially fortchoming easy posts our host speaks of...) So here's a concentrated list of serious essential comps, and one personal individual favorite.

I should also preface with this though - most of this comp (the Testcard one we're in here) is obviously more on the orchestral side of things, and a lot of what I'll mention here is on the slightly more beat/lounge-ish side. But there's always a lot of crossover in most of these. Just depends on the angle you're looking at it and the mood you're in at the time.

Anyway - use Discogs and YouTube for more info - but here's your primary checklist :

Hotel Easy (4 volumes) - I think these used to be on that Zokyat site. Very little known, but fantastic comps of late 60s early 70s material - lot of KPM library stuff and similar.

There is a 4 or 5 volume collection from the German Brillant publishing company on the Brigade Mondaine label from the mid 2000s. Days Of Summer and Holidays In Brazil are two of the titles. Find those, and you should be able to come across the rest. (These also have work by several of the artists/orchestras that are on this Testcard disc.)

There are two collections on the US Scamp label called Music For TV Dinners. They're a little slight, but have good stuff.

Two volumes on Sequel under the name The Easy Project. Mostly UK 60s beat and 70s funk and wacky synth. The first one features the 10 minute Harry Roche EPIC called "Spiral". From 1973. And featuring wordless vocals by Clare Torry. Read that last part again, and think about it a minute....

There's plenty of others. I'll stop with those for now.

And if you want super cool mid 70s background music, ignore the prog purists who say it's a piece of shit, and go find Rubber Riff by Soft Machine. It was actually a DeWolfe library record by Karl Jenkins originally. But it's the mid 70s era band playing on it. And it's fucking ace.

The next thing I could do is go down the path of individual people (Kaempfert, Mauriat, Ros, Budd, Cameron, Hawkshaw etc.), or things like the Rod McKuen/Anita Kerr records and the Mystic Moods stuff. (Those last two probably being closest in spirit to a lot of the alleys you wander down here, JZ.)

But as the German mother says in Willy Wonka - "Ach, Augustus, save some for later."

Fuck me - that still ended up at about three screens on here. I'm a verbose twit, sometimes.

LIAM....the accroyn of your handle spells a name!?
Fear not, I am a renouned gobshite,so verbose yerself away!
I remember buyin Sound Gallery 1 and 2,... 1 was good, 2 was crap, and a few of those other comp's. Library stuff (KPM especially) was always a good purchase,Psych Disco from the late sixties, german porn soundtrax and anything with a sitar on it floated my boat......of course, also happening at the same time in the US was the incredibly strange music thing,which one was also into in a big way.I remember the thrill i got when i found an original Esquivel album in the local PDSA shop on my street....10pence!?.Everyone thought it was crap until a few years later......then came Outsider Music! ...then came the return of punk in the noughties....but nothing came beat the thrill of seeing the confusion of a normal encountering oneself enjoying The Theme from The Two Ronnies,or pumping up the volume on the crazy beats of The Stuttgart Light Orchestra on a long car journey......in its way Easy was the new Punk for me.

Much of the light classical music played by the BBC during their late 1960s/early 1970s Test Cards can be found on these 3 albums of Chandos Production Music: