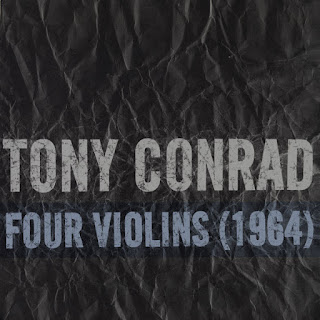 A happy accident is that I have posted this early minimalist masterpiece on the 55th anniversary of its recording, and as myself and 'Four Violins' are roughly the same age I can testify to its long reaching influence on the modern musical world by the smorgasbord of weirdo music that has infected my soul over the ensuing half century.This being one of thee groundbreaking moments that christened that particular ship and launched it down the slipway to its date with the iceberg of humanity.
Why say something with a thousand notes when you only need say it with one? Conrad,as the mathematician (which apparently he was qualified as!?),would prefer to bring everything down to its lowest common denominator,or the lowest prime number......'One'.
One's beautiful simplicity speaks to us all, for we are only one,trapped within ourselves. One speaks to everyone,but not all understands its impotance as a foundation stone. In fact, it can cause many different emotions,including anger. Most musicians and public alike can find this unacceptable.Expecting the flurry of notes of a Mozart Symphony,rather than the constant hum of a wing of cold war bombers flying to wipe out human culture,and start again if we survive.
Like all of the minimalists' recordings,it took the planet thirty years to catch up,and none were released until the mid nineties.The few exceptions had to be paired up with a rock group to see the light of day, like 'The Velvet Underground and Nico', Cales' 'Church of Anthrax',and most widely known, "Outside The dream Syndicate" with Tony himself and Faust. A bargain bin hit on Virgin's budget price label,that provided the backdrop to many a hippy pot-party in the early seventies.No-one knew who Tony Conrad was though,but Faust were trendy with the 'Heads',so it got bought,and filed under 'F' in their album racks.
If you like the sound of a microtonal violin drone that lasts for the entire side of a 1964 reel-to-reel tape spool, then this should satisfy your need. As for those who think that this isn't music, don't get angry...again....there is never any need for violence, but there is still a need "Four Violins".

DOWNLOAD the value of one HERE!
Posted by Jonny Zchivago at 08:50

There's allegedly loads of ToEM stuff that Cale and Conrad would like (liked, in Conrad's case--RIP) to have released, but the decision has long been opposed by LaMonte Young. (Incidentally--though I wouldn't stake my life on this--I believe Young is actual working class. Surprising that. How he, and Charlemagne Palestine, for that matter, managed to obtain Bosendorfer Imperial pianos (~$200,000) is beyond me.)

I'm kinda mixed about that. I'd like to hear it, but then--and not to sound like an unwashed philistine--after a few dozen hours, their stuff kinda starts to sound... Well. Still, I think Palestine "Strumming Music" is criminally short at ~50 minutes.

And all this time I thought I was the only geezer here...

oh man.........if you like this, you'll love https://johncage.org/pp/John-Cage-Work-Detail.cfm?work_ID=140. unless you've already heard it

you're obviously not familiar with my work as "Meat Kiosk":


As far as I am concerned, this is one of the high points and crucial moments of post-WWII music (in any genre)! Indeed, why a thousand notes when all you need is one?!

BTW: Tony Conrad is not only key figure in the New York City avant-garde as a musician and filmmaker. He is also crucial as the person who recorded lots of people as well as himself regularly. Pretty much all of the stuff that has appeared on Table of the Elements since the late 1990s--Conrad, Jack Smith, John Cale--comes from Conrad's tape archives (also some of the Angus Maclise posted previously). Conrad did the kind of bedroom-recording that the 70s and 80s tape scene turned into an assembly line-style routine.

Conrad was absolutley at the sharp end of DIY before DIY.