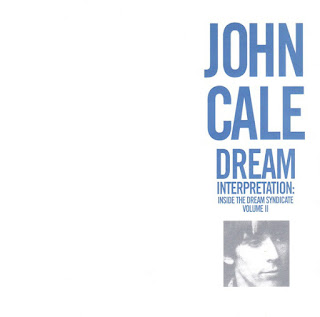 John Cales' name sits proudly atop these archive releases from his days with La Monte Youngs 'Theatre Of Eternal Music"; renamed "The Dreeam Syndicate" by Cale and Conrad.

'Cale' rhymes with 'sale', so as the most saleable member of the 'Dream Syndicate' he gets his name on the top of the list of players,in large capital letters.
This is the Second of three 'Dream Syndicate' discs reproduced from archival recordings by Tony Conrad, of Cale and verious members of La Monte Youngs crew, namely MacLise, Conrad and everyones favourite ex-Velvet Underground member.
Here they mess around with La Monte Young's basic drone concept,which would later turn up in Cale's work with VU.On the opening track,his Viola is like a chainsaw gnawing at your inner ear;and maybe even your inner-soul,if you have one.Which you almost certainly don't......and equally as certain, neither do I, if you were wondering?
John seems to take full credit for all this ground breaking mid-60's experimentation, and one must say, it hasn't dated.Unlike Cales' seventies Rock albums, which are pretty awful trad rock,but caused a slight stir back in the day, and today sound rather dull.....unlike these drone experiments.One Would have preferred the lyrics to 'Fear' sung over these unsettling pieces of music, rather than the flaccid adult orientated rock of his early seventies output.Thats inevitably the result of discovering that girls now found him attractive,after donning sunglasses and growing his hair for minor pop stardom in the Velvet Underground.Its difficult to go back to pure experimentation once this has happened to yer average male with low self-esteem.Lou Reed, never really struggling with low self-esteem, managed to do 'Metal Machine music', but I suspect that was merely a 'Fuck You' concept album, as opposed to rediscovering the artist within;but that was a full ten years after these Cale and Conrad experiments.
Alas 'Metal Machine Music' does stand up as one of Reeds best albums,and is neck and neck with Public Image Limited's 'First Issue' in the race to be crowned 'Thee Badest Bad Attitude Album' of allllll time.