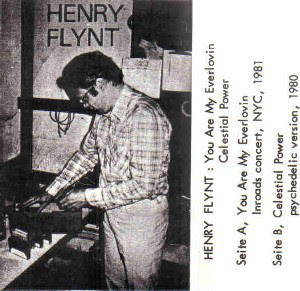 'Philosopher' and year zero of minimalism violinist, Henry Flynt, is a fine example of someone who had too much to think. Even in his quest to return to the roots of american music he thought about it too much rather than just 'doing it' like those documented on "Harry Smiths Anthology Of American Folk".
Yes, this is the man who came up with the concept of "Concept Art", which as a person who has spent most of his life in 'Conceptual Rock Bands', i'm a big fan of. He also came up with “cognitive nihilism”, which I also like the sound of.
As with the New Blockaders in the 1980's, he inhabited that awkward area of 'Anti-Art',which is very difficult to justify when you are actually still creating something?But maybe its about the way one creates things that counts....I rather think so.
He was prominent in the 1963 campaign against the cultural institutions and the art world. Already in the periphery of extreme marxist politics, he got his idea of a public campaign from them. He picketed two museums and Lincoln Center with Tony Conrad and Jack Smith.Flynt began to give lectures assailing art to avant-garde artists, Art was to be replaced with “general acognitive culture,” By which point, Flynt had convinced himself that he did not need his own “acognitive compositions,” and he destroyed most of them;In hindsight, he considers this a mistake....so....incidently do we.Silly boy.
So sadly very little exists of Flynt's Drone Violin epics,but we do have a couple of pieces from 1980/81 that escaped Henry's puritanical over-thinking.
He's also yet another lost member of the Velvet Underground,for whom he played about four gigs in 1966,filling in for Cale.
He spent most of the recording time he didn't destroy,from 1963, in his quest for american ethnic music, like early rock'n'roll,or primitive country and western stompers,with his band ,The Insurrections.Pure music, I guess, which is not too disimilar from musical eugenics,or racial purity.
If Flynt had his way in any cultural utopia of his choosing, music would resemble just a few notches above that allowed in Cambodia under Pol Pot, force fed bluegrass and hillbilly music until we were throttled to death by our own ears.
The ultimate minimalism is ,of course, SILENCE!

I have found his "hillbilly" music quite satisfying in the same way as Conrad, VU and La Monte. His "anti" rantings took him where he went musically. Turned his back on marxism too.

If only the Blockaders had destroyed all their recordings instead of re-issuing them on a weekly basis! Only joking ant-art should be endlessly recycled until it destroys itself. Alien

It'l take some looking, but I think there is at least _some_documentation of Flynt's drone stuff out there--but yeah, not enough. I've been compared to this guy before, being slapped with that weird "Americana" label that's never made a whole lotta sense to me. For some, apparently, being American and playing an unconventional acoustic instrument is enough to constitute "Americana."