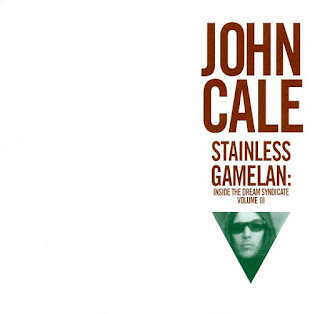 They call it 'inside the Dream Syndicate', but its the Welshman's name in large capitals on the cover!?
Ahh, but this has a picture of 'sexy' era John Cale,when he realized that 'art' ain't worth  a fuck, but a fuck is worth selling out for.
The music is from before he sold out to very minor fame, but there's a particularly amusing ending when someone,a neighbour, or the New York Fire Dept, enters Conrad's apartment and tells them to shut up or else......surprisingly they do!?...not very Rock'n'Roll is that eager compliance.

DOWNLOAD the stained sheets of stainless steel HERE!
Posted by Jonny Zchivago at 20:28

surprisingly they do!?...Know what you're saying though arty types are usually timid...
Saw Whitehouse making a racket in a pub basement club and when the landlord came down and told them to shut the F.up, they immediately did just that and cleared off as fast as their could...

Merry crimbo to all anonymous's out there...with the exception of a few, who are just plain ol' nasty Anonymous's,who try to upset me. I bid those anon's a very shit Chrimbo indeed. ho! Ho! Ho!

There's gotta be a relatively benign reason that Cale's name fronts these releases. I dunno, to my knowledge Jeff Hunt (Table of the Elements) worked exclusively with Tony Conrad, and I don't think he was overly concerned with sales. The other one, that you haven't posted (yet?) is mostly Cale, at least. It's weird, and I never really thunk much about it, til you pointed it out. Regardless, he (Hunt) brought Faust to the US in 1994, with Gate (Morley and Lee Ranaldo), and it was amazing.