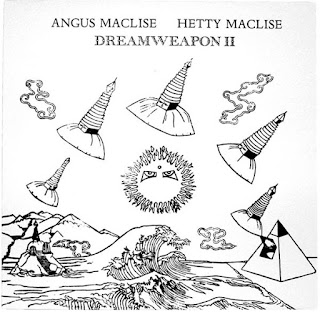 With a name like Angus,its almost certain that MacLise was the beneficiary of either a privileged or a Bohemian background. Which is probably what attracted spoilt brat indie legends 'Spacemen 3' to steal the "Dreamweapon" moniker from that Angus MacLise bootleg they bought with their trust fund allowance.......apologies to Pete Bassman who i am assured was absolutely NOT, from a privileged background at all....but the other two fuckers certainly were.
Is there no area of working class cultture that hasn't been misappropriated by the middle to upper classes? They've got our Football, they've cornered the acting market,even playing characters from the underclass to rub it in some more; and for a long time now, the fuckers have priced us out of Rock'n'Roll!There is no hope of escape beyond unattainable media planted aspirations. The aspirational economy has even turned 'working class made good' success stories (the jury's out on what constitutes 'Success' by the way!), into Nouveau Riche class traitors.Bribed by tax incentives and a status that allows them to distance themselves from societies losers.....ie 'Us'.
One just has to observe who votes for Trump and Johnson in these alternative reality TV elections to find who these conditioned intellectual minnows support. The poorest of the population want what Trumps got,and anything is a price worth paying. So-called solidly Labour areas in the north of England voted for Johnson......even in Manchester!?...blaming their alienation on the so-called 'Metropolitan Elite'!????.....didn't that used to be the Conservatives? It reeks of Book Burning and Lenin accusing the Intelligentsia of undermining the revolution. Now the Conservative Party has rebranded itself, Trump style' as 'The Peoples Party'!?.....seems i'm no longer part of the 'People' anymore,the less than great unwashed. The metroplotitan elite will welcome us book readers with open arms;but don't wear that smug,one eybrow raised Intelligentsia look on the street, or you're liable to be set upon by 'The People' screaming 'Remainer!",or "Socialist", like in the 1978 remake of "Invasion of the Body Snatchers" with Donald Sutherland......or in the case of the so-called 'Brexit-Election', 'The Invasion of the Dream-Snatchers',especially when it comes to escaping that septic Isle ,the new DDR...GBR.
Alas, the 'Posh' are allowed to dabble in such stuff as fine art, or the 'Avant-Garde", so Angus is free to do whatever kind of mystical drone music he desires,and along with wife Hetty, he does a pretty fine job of making a type of western music never heard before.
Although some of it does sound not unlike something the BBC Radiophonic Workshop would churn out effortlessly for a 1959 Radio Drama;but Angus did it on a stream of south american drug cocktails,so its different. The BBC lot,mostly Oxbridge graduates, just stuck to 20 cigarettes a day,washed back with limited supplies of wine and coffee.Thats why they all dies young....like Angus did too, sadly.

DOWNLOAD this dream snatcher HERE!
Posted by Jonny Zchivago at 11:44

Good political rant Jonny! GBR is going to be a grim and loveless place for the next 5 years... already hoping that those that 'lent' that mendacious self-serving bastard their vote have reason to come to their senses in the meantime

Well Leicester are playing Man City this weekend. So may i suggest our lot chant "You're Just A Bunch Of Tories' at the twats for the whole 90 mins! Leicester was solidly Labour.....Northern traitors.
Unbelievable!

somewhere i got the idea that delia derbyshire was a heavy drinker, and judging from some of those tired bags under her eyes in some photos, it seems possible. Mary Tyler Moore was a drunk and she had that same cute but spoilt baggy look.

Those bags under her eyes were the result of long hours slicing tapes together at the BBC studios, for the minimum wage,and no thank yous. She was certainly a heavy smoker,both actively and passively...it was the sixties com'on!
As for drinking, that could explain some of the completly wcked out stuff she invented......genius is often the result of just being drunk,basically.

It's always baffled me some that so many who will, to some degree, acknowledge white privilege, male privilege, etc. are averse to any mention of economic privilege--and my white trash upbringing never taught me that talk of money is, apparently, "gauche" or something... And they--the "monied" classes--guard this privilege with all their might! Is it any surprise that Nico and John Cale, the only proper "trash" of VU, were the so easily ousted? Angus, of course, left of his own volition, being too noble to accept payment for his efforts.

By the way, if there's any interest in early Nico bootlegs--the band-less 70's stuff, with occasional accompaniment by Cale, Lutz Ulbrich, Kevin Ayers, Didier Malherbe, et al--I've got loads I could send.

Economic privilege, in the world of the avant garde is more or less essential.You can't tell your Coal Miner Father or your mother who broke her back on the factory that you ain't gonna bother earning a living, you're into abstract painting and street theatre. We scum are expected by everyone, fellow scum alike, to stay down. Not our place to want something else for ourselves. The under class and the privileged are unwitting Allies.
I still have difficulty accepting that i bought a house,and make a living in low-brow 'art'....a part of me asks why aren't i cleaning toilets or smething like my kind should be....then i think....nahhh! It was Punk that freed me, certainly not education....Do It Yourself.

Wow, i did not expect you to get into the Minimalist realms and these three Archive Offerings are not too easy to get by, could only find some tacks on youtube,missing quite some - so:
Thanks a lot!