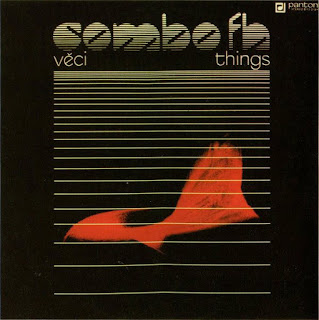 Amother I got from the bargain bin in the Ultima Thule progressive record shop in Leicester back in the nineties;I think this was one pound.
More Czech, brass heavy prog, with a distinct Zappa influence.
Apparently there is a Frank Zappa statue in Prague somewhere. The Zappa family did originate,rather fittingly, from bohemia before they wisely emigrated to California.I did have a friend from the same area, who ultimately drove into a tree and died, but he did look like Zappa, a grungier version of Zappa, but nonetheless he had that Bohemia look.(especially after the accident!)
There was also a Czech prog fusion band actually Called 'Bohemia', which i considered posting, but its a bit too jazzy for me....as well as being a bit Shit....but is considered a Czech prog classic...and why not?
Combo Fh could have easily fitted into the UK post-punk prog scene if they had been let out to hang at Rough Trade in London...but,alas, they would have needed a major make over, a shave at least, to make it alongside Pigbag or Blurt.

DOWNLOAD some things HERE!
Posted by Jonny Zchivago at 20:09

Thanks, I like this album. Don't think I've heard Bohemis. Aw go'head, post 'em already. I imagine there are a couple decent nuggets to be dug from the turd. As I wade through the bowl of music blogs, I maintain a folder to toss those type of decent tracks from otherwise shite releases. It makes for an interesting playlist every few months. I appreciate the wider view of east euro bands over the past several weeks and have enjoyed a lot of it. Perhaps it's something to do with big noses and grungy beards, clean 'em up and you scrub away all the good bits.

Ok, will post, track 2 is good,if you edit out the vocals.