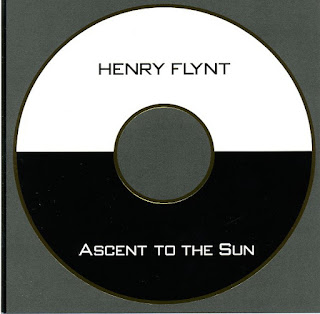 The final release in the New American Ethnic Music series is "Ascent to the Sun", an earwax rattling hillbilly raga in the family of 'You Are My Everlovin' with a double violin approach featuring our Henry playing against,or with, himself,or his-selves.Late period Flynt, from 2004,It sounds as if he wasn't listening to the other recorded tracks of his own fiddle playing as he added the overdubs,and it works just fine.Freeing himself from the strait-jacket of time structure and syncopation....this ain't no disco;but it is, some kinda twisted hoedown that needs dancing to......maybe we should give Jimmy Pursey a call?

"For me, innovation does not consist in composing European and academic music with inserted folk references. It consists in appropriating academic or technical devices and subordinating them to my purposes as a folk creature."...so says our Henry.

DOWNLOAD to the earth HERE!
Posted by Jonny Zchivago at 23:21

Thanks for re-introducing me to Flynt.
I have an abiding love for La Monte Young's music, especially The Well Tuned Piano (despite it's five fucking hours plus).
The posting spurred me to listen again to the release I have and it really is something else.
tantivy0

I have toyed with the idea of posting the Well Tuned Piano, after all i have posted those 9 hour long Jandek piano improvs.....damn it, i'm going for it.
Some Charlemaine Palestine bosendorfer stuff too.