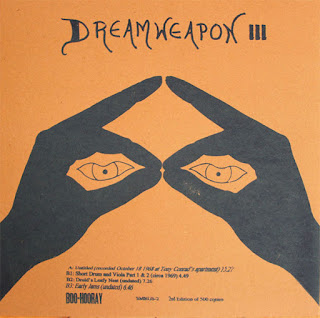 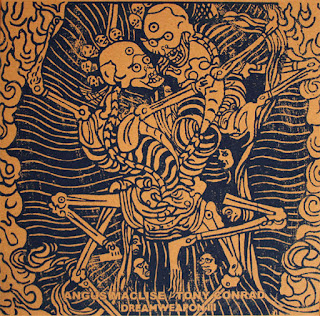 Nowadays, everyone's got a bloody 'Drone Project' on the go;but back in 1963 it could get your head kicked in. As with,so-called,' Harsh Noise' ,Drones turn up in the most unlikely places,like  in the capital of the Hive Mind, Ibiza, fucking Hip-Hop, Radiohead records......fuck me!
So, don't go making that Drone triple album and think that you're cutting edge and weird, when you patently ain't.....same goes for Harsh Noise' by the way.
55 years ago, in Beatles (who also used drones in '66) crazed america, yes, you would have been on the 'cusp',and qualified for the 'Weird' label.Even back then, the Drone was borrowed/inspired from Traditional Indian music,and various other similar ethnic musics designed for meditation and meeting god when coupled with certain fungi based substances.
The biggest Drone of all, are the fuckers who drone on about drones......so this Drone will end ....er......NOW!

DOWNLOAD to weaponize your dreams HERE!
Posted by Jonny Zchivago at 11:42

I guess its about time I checked this one out. Thanks!

Witty as (almost) always :) As you mentioned India I would like to recommend a record by tragic figure Sheila Chandra (a singer with an incredibly beautiful voice who cannot sing anymore because of "burning mouth syndrome"): "ABoneConeDrone" from 1996. Please don't hate it, Jonny, just because it was released on Peter Gabriel's Real World Records. You can have a listen on Youtube, for starters go for no. 2 using (I guess) a monochord, which is the ultimate drone instrument, I think: 42 strings producing no more than one tone (and loads of beautiful overtones).

Whats with the (almost)?
Yeah heard Chandra's drone album when it was released.My girlfriend had her earlier records,so i thought i'd get her that so I'd have something slightly less ethic coffee table to listen to than normal. Round 96 there were loads of ethno-hip hop singers, the awful Natascha Atlas etc...i expected Chandra to do the same, but no...she was never heard of again.

It's amazing how a delay pedal and a little THC can fool you into thinking you're a musical genius.

Aaah ... the (almost). Don't know who smuggled that into my words, sorry for that :)

Jonny, you know wat I like ? I like it when I come back from holiday and get a whole lot of fun stuff from your site. Including todays recorded on my actual birthday