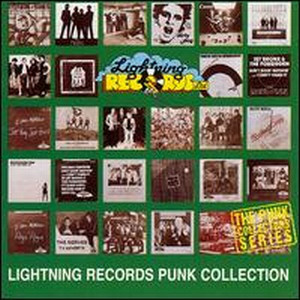 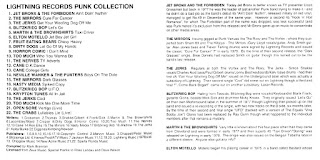 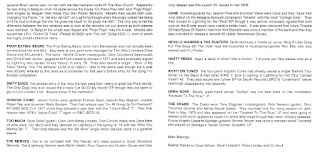 Lightning Records had a massive hit in 1977 with "Uptown Top-Ranking" by Althea and Donna, so they had buckets full of cash to penetrate the 'Punk' market.Trouble was there weren't any Bands left to sign up, and no-one would want to sign for such a dodgy label as that anyway. So they got all the groups no-one wanted, and made a few up too.


This compilation of Fake Punk cash-in masters, Lightning Records, is a punk dustbin full of fake groups and groups signed because one of them had a short hair cut and knew naughty words like 'Berk' or flipping Heck!
If you didn't know any better, and you heard "Dark Glasses" by The Mirrors, in 1978, you'd either be horrified at its vicious roll'n'roll furylessness, or find it totally laughable. The correct reaction would have to be laughter, as it's one of thee most clueless attempts at a punk cash-in ever gobbed onto vinyl.

The lyrics, sang by what could only be an off-duty Elvis impersonator,or that bloke from Spandau Ballet, are priceless. Examples of which are:
"You're wearing Dark Glasses, Have You Got The Class?"
"In a doorway they take co-co with a jacknife"(they weren't allowed to say Cocaine I guess)
No they weren't the proto-Pere Ubu Mirrors from Cleveland Ohio,but they did play the Roxy and The Vortex, and support Sham 69. How this tune went down I shudder tho think.
Whereas Fake Punkers, "Martin and the Brownshirts" did actually come from Cleveland, as in the shithole in the north-east of England, rather than the shithole in America.
Nasty Media, no-one knows anything about,but I suspect they were another made up band, and were the only 'Punk' band to rhyme Berk with Jerk, so they get top marks on the Punksploitation scale from me.
Neville Wanker & The Punters are the wonderfully annoying bosses of the middle-aged blokes go punk punksploitation Oscar. The backing singers,(which breaks Punk rule number one, 'No Backing Singers),relentlessly chant "Punk...Punk Rock" all through this charming ditty about how "The Punk Rock is here to Stay"!!!? Its like a parody that would regularly crop up on awful TV magazine programme like "That's Life" in 1978.
The Fruit-Eating Bears even went on 'A Song For Europe' in an attempt to get on the Eurovision Song Contest.....they didn't.....but you can get all their stuff HERE!
Elton Motello, whose Gay anthem 'Jet Boy Jet Girl' was nicked from fellow chutney ferret Lou de Prijck and lip synced by Plastic Betrand, was in 'Bastard' with Brian James(the Damned), and is probably the only person on this with any debatable cred' points in the Punk Rock world.
The rest are a bunch of flare wearing converts with shoulder length hair.Maybe sporting a discreet safety pin, a 'punk' badge or two,and a length of chain attached to their jumpers......which for me was a far better image than getting tarted up on the Kings Road and spiking up your previously blow-dried locks.
This album is crammed with effortlessy insipid punk and new wave facimiles, nothing at all offensive, and actually nothing to do with 'Punk Rock'. Its great!

PS...you can get a full Fake Punk onslaught from Die or DIY?'s Fake Punk compilation "Come and get yer Punk in Woolworths" by clicking HERE!

DOWNLOAD this fake storm HERE!
Posted by Jonny Zchivago at 12:25

Dirty Dog once auditioned for Bernie Rhodes, unsuccessfully. So instead of being third on the bill to The Clash and Subway Sect they signed a publishing contract with the bloke from the local record shop (Bluebird) who then got them a deal with Lightning. Rhodes interest was down to them having a black guitarist who he later lured away to join the Black Arabs.

Nothing wrong with either Mirrors single in my opinion, for what that's worth.

Well I prefer Dirty Dog to post 1st album Clash.
The Mirrors however, although I enjoy their singles, are pretty terrible....but i never let that get in the way.

"Who lives in a house like this....?"....Yeah I knew about the Grossman connection,but only remembered after i'd written the spiele.......he still plays in a band apparently.

The Clash might have done better signing with Lightning instead of CBS.

Jet bronx & the "new forbidden" have played the rebellion festival & there is
footage on you tube unfortunately.

I was surprised that Snatch were not included on this album with All I Want/When I"m bored as Jerry Nolan from the Heartbreakers drummed on it & may have added a bit of punk credibility,instead we got Lloyd Grossman.

Many thanks for uploading this LP & keep up the good work.

I would love to read a decent article on Lightning Records. It's impossible to find anything informative online and judging by the scan of the CD booklet, that doesn't go into the history of the label either.

Who ran it? When did they start? When did they fold? What did the people involved move on to? Some of them were clearly on the ball eg that amazing Snatch 7" referred to above. And what an incredible picture sleeve!


It's all highly mysterious!

Fuckin' 'ell!...just watched The Queen Haters......I actually like the song,great lyrics,great monotonous riffage,would have sat nicely on Lightning Records. Not so sure about the relevance of it as satire as it refers to the falklands, 1982...but beats That's Life in the UK to it by 6 years.
Amusing for american TV nonetheless.

@James Trash - what was the name of the Dirty Dog guitarist who went on to be in the Black Arabs? I don't think any of the BAs have been named before. This is seismic!

What was the name of anyone in Dirty Dog? Even the song credits are group compositions! If there was ever a group photo he would be the black one I guess.

Disappointed to discover Dirty Dog was a 'band' and not some enigmatic individual who played all the instruments, avoided baths and slept in a kennel outside his mum's council house. Stunning indictment of police brutality - "So, Mr Policeman / Won't you let go of my hand?" At least they didn't stick their woofing dog on him.

I often skipped down the street hand-in-hand with a handsome member of the SPG.Didn't you?

Why did the punk cross the road? Cos he was safety-pinned to a SPG officer!

On the subject of awful pseudo-punk, have you heard 'I Hate You' by US 'band' Gang Green and the Amputators? Makes Neville Wanker sound like Crass. The fact it came out in '82 makes it seem even more pathetic, redundant and cheesy - though it's kinda amusing.