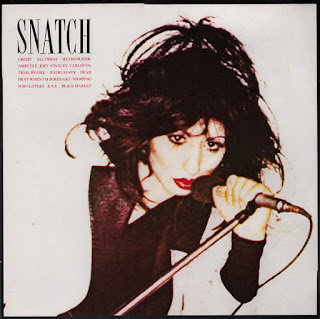 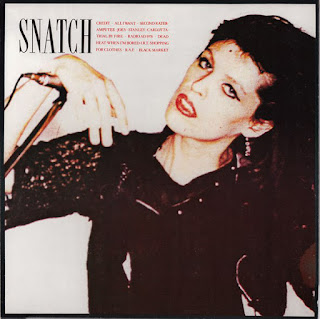 Oh Christ!...Patti Palladin and Judy Nylon were 'Snatch',two potty mouthed american ex-pats,or, immigrants if they were black; who were sooooo bored that they decided to be Rock-Stars one hungover morning after drinking somebody elses booze the previous night.
There are times when the phrase "Too Cool For School" applies rather too fucking much. You just know these kool chicks wouldn't want to be seen with ugly penniless no-marks like you and me....well at least not you anyway.
Just read this toe-curling interview with Patti Palladin extracted from too cool for school 'search and destroy magazine:

"When I came to London in about '74 we(Palladin and Judy Nylon) became good friends. We were trying our best to get something going, we were both creative chicks... We both had ideas of sorts.
For 2 foreign chicks living in London, what is there really to do? So that's why Rock & Roll! It was the obvious thing to do out of boredom. We thought about forming a band together. We worked on basic lyrics and melodies and things. But it was hard trying to find people who understood where we were coming from. At that time all the punks were suddenly beginning to appear. Everyone was into saying, "I'm a punk. I'm cool, I'm aggressive, we're going to change it" and all this shit."

These cool coooool chicks could easily pass for Glam refugees Johnny Thunders and Bowie in drag. In fact didn't Palladin have a relationship with her male-self? The ultimate narcissistic kick.
These flat-chested chanteuses had their most famous single released on fake punk label Lightning Records in 1978, and it scraped the bottom edge of the charts. Like a Glam/Punk version of The GTO's, they sang about being bored and shopping to muddy post-bowie backing tracks mixed low beneath their piercing drawls.
The myth is that they never exploited their sexuality, unlike the other Punk girls(?), which is of course pure bollocks.Look at the sultry poses that adorn the two sides of the LP cover....notably with the less attractive one (Judy Nylon) on the back.I imagine there were some bitchy battles about that subject....ahhh....maybe not because they were 'Artists' weren't they.....better than us.
This all involved, naturally, an 'Eno Collaboration',but knowing Eno, they likely collaborated in bed as well.....they were after all, Too Cool For School.

DOWNLOAD and Snatch a earful HERE!
Posted by Jonny Zchivago at 11:23

R.A.F was the B side of Eno"s Kings lead hat single(an anagram of talking heads)from 1977,Brian also devoted a song to Judy Nylon on Taking Tiger mountain by strategy from 1974 entitled Back in Judy"s Jungle.

Hi Zopo Eighties etc.....sorry i accidently deleted your comment!?.....repeat it if you wish.....but yeah i like some of the tunes on this too. And it wouldn't surprise me if one of Snatch did read the above prose....i'm sure they're always googling themselves. Did notice that a certain J. Nylon made a comment on discogs,about her own album of course.

Well, question or hope was that the sooo bored artists would read your to the point comment. And my response that I really do love some tunes on this album. Black Market being my favorite. Sorry for long name. Once created a blog for a one time reunion night for a venue in the southern part of the Netherlands called Zopo. Good times. You can call me Johan. Johan NL, responding many Times with Jim Mutant. The beginning of bringing exiting music to the internet.

Thanks for this, i didn't know there was an album, i only have the IRT record which i love.
Patti Palladin did a good album with Johnny Thunders called Copy Cats which is worth a listen.
THANK YOU!!!

I first heard of Snatch when I discovered ENO (in the early 80's) and for years tried to get this album. This finally happened last year when it was available at Record Store Day. No download though so I don't feel guilty downloading this. Is this a vinyl rip?
Now to try and get the recordings made for Fetish records....