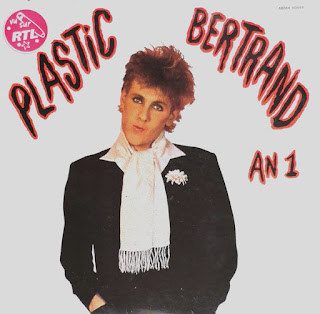 Did someone mention Plastic Bertrand?
This incredibly dumb but intelligent punksploitation miesterwerk is paradoxically both a cynical yet clueless trend jumping piece of trash, and at the same time probably thee perfect Punk statement.
Half an hour of the same one note dirge repeated half a dozen times, intersperced with a couple of legoland reggae by numbers.... numbers. It sounds like a 45 rpm record played at 78, backed by what seems to be a solitary drum struck militarily in strict 4/4 time.Like one hand clapping against a toilet cubicle wall, allowing easy access to the gloryhole, undoubtably a facility frequented often by Plastic B himself?
Novelty hit, "Ca Plane Pour Moi" , of course dominates, but other unthinking classics also provide the coup de grace for music and musicians everywhere.The infinitely moronic 'Pogo Pogo' standing out from the chaff......Weeding out the chaff from the chaff isn't an easy process.This record not only helped destroy punk but almost everything else too, except Pop. Punk is an 'Atitude' the 'punks' say......Fuck that shit says Plastic Bertrand......in french of course!
The icing on this very sickly cake came when it turned out that Plastic never sang any track on either this record,or the next four Plastic Bertrand albums(you mean there were more??)!? Just like those other continental Gay icons Milli Vanilli (i assume that P.B was batting for the other team....surely?).Cock fun anyone?
This is why Plastic....can I call him Plastic???....makes the list of famous Belgians.

Hi - I hate to derail your thread but I thought you may be amused by this. My name is Michael - born and raised in Detroit, Mi..
I was part of the Industrial - Goth - ... music scene i the early 80's to the mid 90's.
My solo project was Cult of Decay.
I thought you would be amused with this piece from a 1985 cassette '6 o'clock nightmare'. this was a pre version of the piece;
'Christmas in a Car Wash' ..
https://www.4shared.com/video/xV3Dn_csgm/Cult_of_Decay_-_Christmas_in_a.html
Thanks for all you do.
-Michael

Hi,
Plastic B was a smiling face on Lou Deprijk's voice and compositions,
Lou D is an ultra-opportunist producer that began singing in some
lounge exotic groups like "Two man sounds" or "Lou and the
Hollywood Bananas", very commercial, he was radically not a punk!
Later he was around 50 on the New-beat wave, we can see him in the
film "sound of Belgium".

I'm sure he is behind some auto-tuned rapper from the early 2000 years.
A strange new movie named "Under the silver lake" talk about that
concept of fake creative idols, like puppets used to divert, the punk
movement in our case, from ideological and political ideas and activism
that could be at the root.


In "Le café du coin" the most explicitly punk bar in Brussels,
where Plastic used to be "after work" with Hubble bubble, he
directly became the laughing stock and had to avoid the place.
In 1979 he was droved in a rolls by a chauffeur and once refused to
sign an autograph to my 15 years old sister. That day, he came to
visit our neighbour "Bebert" (a kind of skinny Billy Idol who was
singing too) and the rolls stood an hour in front of our father's shop.
I was 14 and began to go to "le café du coin at 16,
an older friend told me about Plastic in 77 :)

Indeed, an old tactic to make something dangerous into a joke. But i think Plastic B highlighted both what was good and bad with the very contrived 'ounk' scene. The punks themselves actually made it all into a joke,at least PB was doing it as business/job, which is more honest I believe.......its stands as a monument to moronic pop, almost avant garde.

this guy is a fake..
It s not him who sing..but the producer ..
a great r n r swindle.
just a shit

I just came across an article about this guy and sure enough I find the album here. Very curious to hear it after reading the comments here.