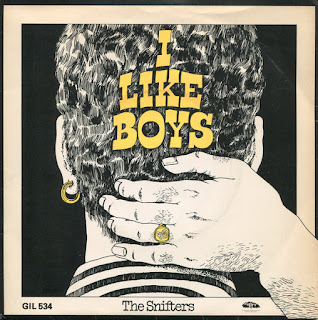 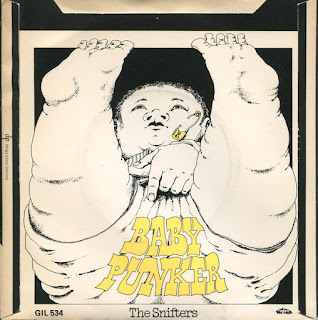 Well......er......I'm frightened! This slightly dodgy euro-pop atrocity, enters itself into the "What the Fuck was that" category of pop histroy......not that this anthem for Gay sexual predators was at all popular.....except eith Gay Sexual Predators.
The lightning Records Belgian connection comes well and truly out of the closet here, with this Synth Punk tribute to 'Boys and their Stinky Toys'.....a desperate grasp for some pink punk  pounds from the gaping back pockets in the crotchless leather shorts of the nascent Gay Disco scene.
This horrible tune will leave you open-mouthed and looking for the exit, rather than open-mouthed waiting for one of those 'Stinky Toys' to fill the void.
It's also actually quite funny in a 'Good Bad' kind of way.The heavy flemish accent doesn't help, and the Arnold Schwarzenegger style backing vocals, sound like they're being delivered by a lobotomised hairy backed lummox in a gimp mask, chained up in a particularly damp corner of a secret basement apartment.

The sleeve accurately describes the music, with a sovereign ringed hairy hand caressing the rear of a wavy haired manchild, ripe for some abuse.
The rear sleeve, for the B-side, "Baby Punker", is potentially more disturbing. Portraying a baby seemingly gratifying itself in an unforgivable prone receiving postion, through it's diaper!!!?
This could easily have been the Belgian entry for the Eurovision Song Contest in 1978 as far as I know. Its certainly an argument for the UK leaving the European Union.
Whoever made this record is, no doubt, in prison now......or, more likely, Dead!

Now that was the most hilarious comment I ever read about a piece of music. Just downloading ... wait. Well, except for that never ending boring solo it could have been funny at least. Nevertheless a keeper for its uniqueness. Thanks, and please keep on with your work!

I love your writing as much as I know I wouldn't like the music you feature. Who cares? Great work. Makes me snort unpleasantly with laughter.

The Snifters were actually Dutch, from Amsterdam I believe. An easy mistake to make though since Belgium has more fake punk per square mile than any other country.

I tried to leave this comment yesterday but it kept going back to the Google/Blogger log in. Anyone else having issues? Possibly a similar problem last week as I left a further comment on the Lightning Punk Collection post in response to someone asking about the Dirty Dog/Black Arabs link. That hasn't appeared either.

@JamesTrash - if the worst comes to the worst, could you repost your Dirty Dog comment here instead?!

You may enjoy the mindless facetiousness at my own blog. I don't think you'd like the music, though but.

Throckmorton, your blog is complete unadulterated nonsense.....I lOve It. Fuck the music, no-one in bloggersphere writes shit about anything.Therefore you will be recommended.
Luv'n'kisses
JZ

Crackin blog/reads. I couldn't see a message option so apologies/delete if inappropriate.

We're a wee (small) Indie rock/Powerpop band from London, UK. We've just released a single (Free on Bandcamp), and you might like the tunes based on some of the jazz you post. So, if you've got a few mins we'd certainly appreciate you giving a quick listen. You'll probably know within 20 seconds if it's your thing.

Hi Pat....yes its inappropriate, but hey ho!
I listened, but you're too good for my tastes(who wants me to like 'em anyway?...especially if you want to get anywhere commercially?).Reminds me of the late eighties before Indie bands took ecstacy. Try being a bit less likeable,stand out,and get crapper equipment......i'm trying to be constructive here.......but basically,ignore what anyone says and if you stick to it long enough, you'll get a fan base. The public will dig anything if its repeated enough times....the idea is to have a laugh.
Thanks for the big up.