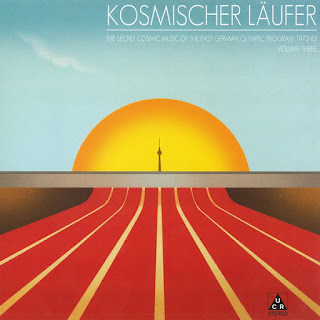 I suspect that most of the DDR womens athletic team trod that fine line between being a male while still retaining enough of the female to be considered a woman.
Andreas Krieger,was once known as Heidi Krieger,and competed as a woman for the DDR, winning the gold medal for shot put in the 1986 European Athletic Championships.Trouble was that Krieger was dosed up with so much anabolic androgenic steroids that she changed sex.
At the trial of the leader of the East German sports program and East Germany's Olympic committee, Krieger testified that the drugs he had been given had contributed to his trans-sexuality;the doping deprived him of the right to "find out for myself which sex I wanted to be."

Maybe it was a combination of this training music and the drugs that tipped Heidi into manhood? So be attentive, do not listen to this gorgeous Kosmiche musik at the same time as downing a few doses of anabolic steroids,or you may just change gender type.

As it says in the liner notes:
This third collection of Martin Zeichnete's secret work for the DDR's athletic elite comes in two parts. First, a running program (Tracks 1-3) at 164BPM finds Zeichnete at his most hypnotic, particularly on the motorik, rolling 'Jenseits Des Horizonts'. This set ends with the elegiac 'Für Seelenbinder', a song dedicated to Olympic wrestler and communist hero Werner Seelenbinder.
Particularly exciting is the second part (Tracks 4-10), a soundtrack to a lost animated film UCR obtained only a few months ago.
In the spring of 1976 Zeichnete learnt that the NOK der DDR hoped to launch a bid to bring the 1984 Summer Games to East Berlin. Excited, he returned to DEFA in Dresden where he and an animator colleague conceived ‘Traum Von Der Goldenen Zukunft’ (Dream Of The Golden Future), a 20-minute cartoon they hoped could be used to promote the bid. An inspired Zeichnete composed the music in a week. The bid and thus the film were abandoned and the music was cast aside where it lay hidden and forgotten. Until now.

DOWNLOAD some cosmic androgeny HERE!
Posted by Jonny Zchivago at 12:17

This looks like an interesting listen. Its too early for anabolic steroids so the caffeine will have to suffice! Thanks for all the interesting ear candy!

I think Volume One and Three are my favorites and Der Traum Des Jungen is most gorgeous little electro-ditty since Zuckerzeit.

As a suppliment to all this Soviet era subterfuge I well remember a banner hoisted at the 1982 World Cup clash in Malaga between Scotland and the Soviet Union which read " Alchoholism vs. Communism".

Not sure if McFayden was involved in that one, but, given my penchant for both life styles, I was relieved when it ended as 2-2 draw (Scotland were knocked out of the competition naturally).

As you’ve seen fit to upload all four volumes of Kosmischer Läufer for free perhaps I could take this opportunity to tell your gentle readers that if they enjoy this music they can support Herr Zeichnete by buying it on vinyl from the shop here: https://kosmischerlaufer.bandcamp.com/merch

Shug... Yes i remember that banner.You can always trust the scots to self parody....mainly because they're too pissed to know any better.

Communism and Alcoholism reached its zenith in the Soviet Union funnily enough,where this pastime was taken to a place beyond mere self-destruction,esp in Siberia.Kerosene was the tipple of choice.

Id buy this on cd but buying vinyl is like going from an internal combustion engine to the donkey no thanks! Since its not on cd well.....